Visits in support of WFFT

We are currently still fighting hard against the false accusations directed at the WFFT and its management since the raids of February. We are however also still looking after hundreds of animals at the center at this moment and since the rains started early April we are now in a very green surrounding and our trees growing faster then ever. The animals love the natural surroundings and the extra shade of the many large trees…

After all the negative news came out on Thai and international TV and newspapers we did however see an increase in visits from celebrities, (foreign) government officials and politicians who wanted to find by themselves what this trouble was all about. Most were shocked to find that the WFFT wildlife rescue was not the “bad” place for animals as alleged on Channel 3 and 7. 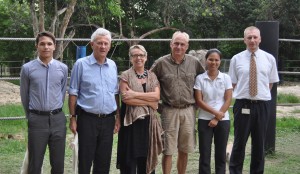 We have received in the last 3 weeks several delegations from organizations such as UNEP, the Swiss Embassy, his excellency the Dutch Ambassador and Consul and several more (mostly) local politicians. We also received letters from several foreign government agencies, the Scottish parliament, Buckingham palace and lots more. Some visitors came to see for themselves and find out the truth, some in a straight sign of support.

We wil still need your help to fight the charges in court, and wish to remind you that even in Thailand lawyers do not work for free. Please if you can help us, use the donate button on our website!

At WFFT, collecting fresh water mussels from the WFFT lake is a fun task for volunteers. We harvest the mussels once a month to make sure we do not reduce the wild population.

A growing trade: Monkeys sold as pets in Thailand

Internet trade of monkeys a booming business! WFFT investigation part 1 Over the last 2…

Meet WFFT's newest resident 'Rango'. Rango is a Brahminy kite (Haliastur indus) that arrived at WFFT a few days ago with deformed wings.