Update May 13th, three months since the raid… 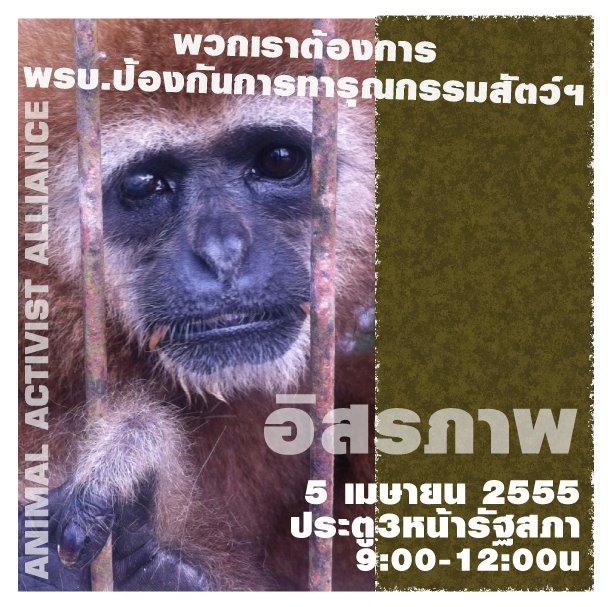 The latest news on the confiscated 103 wild animals from the Wildlife Friends Foundation is that we still do not know anything of their whereabouts or their current welfare. Four animals (civets) have been returned by the DNP as they actually were not protected species under Thai law but still 99 animals of various species are being kept by the department at this moment. We have received reports two months ago that some animals already died at the DNP shelters and that some are in sub-standard care so we are not surprised that the DNP has refused ourselves and the media to see the animals over the last three months since they were taken. We are however of course extremely worried about these animals.

Already at the time of the confiscation we showed all documents for the animals in our care but it was completely ignored by DNP staff and even the director-general on both of his visits said he was not interested in looking into the matter. More frustrating and stressful was that young animals were taken from their parents and groups they had been living with for over 6 years, who were actually born at the WFFT center and were legally owned by the foundation as they were offspring of the registered wildlife in 2003 during the National wildlife amnesty. Sixteen (16) of these animals were taken, who were registered on June 26th 2006, and we urgently asked for their return. Now 90 days later we still have not seen them back, know about their whereabouts or received a reply from the DNP. Is the fact that at least 2 of these 16 animals (9 gibbons and 7 macaques in total) have died under the hands of the DNP a reason why they refuse to return them?

All other animals have been requested back as well with all paperwork presented but the DNP send all paperwork back to our address and told us to work it out with the police. Strange that the police is being used as a dumping ground for political games by the DNP in this matter. The WFFT has actually no problem in handing over wildlife to the DNP as it has done on various cases in the past, however the term “confiscate by means of a legal arrest” seems to be not the same as taking in wildlife as a hand-over or donation. Dozens of wild animals have been handed over in the past with in particular the gibbons that went to Maehongson for release back into the wild in a cooperation with the DNP and Mahidol University.

The remaining animals at WFFT are still in very good condition now and we still wonder why the DNP had to forcibly take away so many animals from the center even though they received paperwork on all animals over a period of 7 years, from the end of 2005 till January 2012. The DNP only a few weeks before stated that they did not have proper rescue centers available for the always increasing amount of animals to be taken in, and the head of Kao Zon and Kao Prathap Chang wildlife breeding centers went on TV saying he had no money to do maintenance on cages nor did he have money to feed all his animals. He said he had to resort to selling rescued wildlife such as birds to create income to buy food.

For 6 years the DNP never responded to our registration of rescued wildlife, they came to see the animals once in a year or two and always said the animals were fine, when we asked for a written confirmation they told us again and again to be relaxed as we were working together and “everyone” knew we were helping out the DNP with our rescue and medical work.

A few days ago we received a letter from the head of the DNP region 3 office asking us to hand over 56 more animals, this time not as illegal obtained wildlife but in reply to 3 registration-letters we send over one year ago. In this letter mister Uthai Promnaree head of region 3 office in Petchaburi, who is to face court in 5 weeks for abuse of power and 3 more criminal charges, says we will need to prepare 56 rescued animals within 15 days for handover to his office. We expect he will send more letters like this for those animals that were registered in the years of 2005 till 2010 later.

Mr Uthai, just like his boss, Mr Damrong Phidet, has said on several occasions that the enclosures, the medical facilities and the overall wildlife rescue center of the WFFT are of sub-standard and straight-out bad for animals under our care. According to both, animals under their care are much better off and for that reason they should be handed over. At the same time right now they still refuse to confiscate 300 wild animals such as orangutans, lions, tigers, marmosets and lots of other protected species from a notorious illegal wildlife trader in Sraburi. The head of two government wildlife breeding centers in Ratchaburi says he can still not make ends meet to feed all wildlife (see video clip)…

I am sorry to have to conclude that the political dirty games by some people of the DNP have still not come to an end; The overall wellbeing of those rescued animals that already have suffered so much at the hands of people are still being used as political pressure tools. Even though the DNP head-office legal department has suggested that a temporary care of the rescued wildlife by the WFFT is a completely legal option some still wish to remove more animals to places that are not ready to care for the animals, resulting in more unnecessary suffering.

Furthermore we would like all people to know and see the truth in this matter. Is WFFT really such a bad place for the animals?
Can our on-site medical facilities be matched by the DNP’s or the other way around? Is the animal welfare standard at any given place better or not?
What is in the best interest of the animals?

We hereby invite all concerned citizen, NGO’s involved in wildlife conservation and animal welfare, the veterinary counsel and veterinary association as well as the media to inspect our wildlife rescue center and elephant refuge
WITH UNLIMITED ACCESS TO ALL OUR FACILITIES.

We kindly ask the DNP to do exactly the same so “the people” can be our judge!

(I want to thank all those DNP officials that have called me or send me messages in support. We appreciate your concern and know this is all an embarrassment for some of you, but we understand that not all support the bad actions of only a few individuals.)

Welcome to Pen Suk and Yu-Yen… and 6 unexpected others…!!!

A project by the Wildlife Friends of Thailand Coral reef conservation and restoration, Sea Turtle…

Finally JUSTICE after 2 years of fighting! The 27th of February 2014 is an important…