WFFT is not allowed to inspect or visit the confiscated animals

A few days ago we finally received an official reply to our demand to see the confiscated animals that were forcibly taken in February of this year. During the raid we asked repeatedly if we were allowed to visit the confiscated animals and check on their wellbeing (on the video clip hereunder you can hear the director-general say repeatedly that we can of course go see them) and we did believe him at that time, however when we asked to go see the animals at Kao Zon and Kao Prathap Chang wildlife breeding centers we were refused entry, there was even a sign on the front gate with Edwin’s picture on it and the text “This person is not allowed to enter at any circumstance!” (See picture under the article)

We did ask again on the 27th of February to see the animals as promised but were told to ask in writing. We did write to the DG directly, and received a written reply finally in the end of May, three months later, that we will be not allowed to see the animals at all. The DG states that “the media” is allowed to go and see the animals, but we cannot confirm if the shown animals are indeed ours without being present ourselves… Toe be honest here, not one TV station or newspaper has been able to see the animals yet! (Document posted here)

We obviously don’t know who we can believe here any longer! 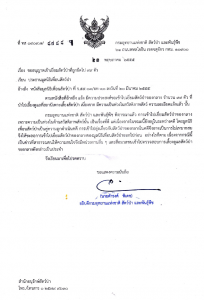 DNP agrees some animals must be returned
While 103 animals were taken at first the DNP returned 4 animals (that were not protected under Thai law but nevertheless taken) within a week and is now preparing to return 19 more (as they have been saying for the last 8 weeks) to the WFFT. We are sure that all animals eventually will have to be returned to the wildlife rescue center. Why the return of the animals is taking so much time is not 100% clear but according to some reports it seems that some of our animals are seriously ill and some already have passed away, one just only days after the raid. This happened at the same time that a large number of confiscated elephant fell seriously ill and one died mysteriously while under DNP care. These elephants came from another facility, not ours and still live in horrific circumstances in Lampang.

The fact that some of these (to be returned) animals are on the list of the first to be returned batch might be the real reason for the delay, you can’t return dead animals to their rightful owners, can you? Or is the slow response and action a way to safe face? If the director-general has to finally admit that he was wrong in all the groundless accusations over the last months. read the accusations in an earlier post ( these have now all proven to be wrong: fake foundation, temple encroaches on protected forest land, animal torture, animal trade, hiding Iranian terrorists at the center, no Thai vets employed at center, abbot of the temple receives a bribe of 40,000 a month, sub-standard facilities and so on….)

In a letter from over a month ago the head of region 3 office of the DNP has confirmed that our claim that 16 animals were born at WFFT and were in time reported to his office (in June 2006) have to be returned, however he claims now the DNP has no wildlife specialists to confirm that these animals are offspring of rescued animals at WFFT before 2005! This seems merely like a slow-down tactic right now, of course the DNP specialists in Bangkok can confirm within a few days by DNA tests that the monkeys and gibbons mothers and fathers are still with us, so why this now?

Furthermore it is now clear that WFFT always has registered the animals in time with the region 3 office, but that they, over the last 7 years never took the paperwork any further. That is of course not a fault at the side of WFFT but just a case negligence on their side. With police and the prosecutor now looking at this case for over 100 days it is hard for all parties involved to take a step back and admit to the wrongdoing. For now people egos are tarnished, faces will be lost, but the animals are as always the losers in all this, their lives and wellbeing is still at stake. 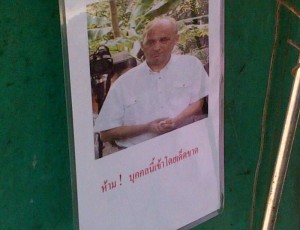 “This person is not allowed to enter at any circumstance!”

Personal note: I am not fighting against the department of national parks itself as an organisation that we have had great work with, but merely to a small group of people that have attacked us in a horrible defamatory way, while torturing animals and threatening staff and volunteers. My only way to protect ourselves, the objectives of the foundation and the wellbeing of hundreds of animals is to publish all facts against the false accusations that were made against us.

Live a wild life! We are in need of wildlife volunteers for the next few…

Where is the protection of otters from the illegal pet trade?

It is out of control right now!  Over the last 17 years I, Edwin Wiek,…

1. VETERINARIAN For the Laos Wildlife Rescue Centre Wildlife Hospital, we are looking for an…