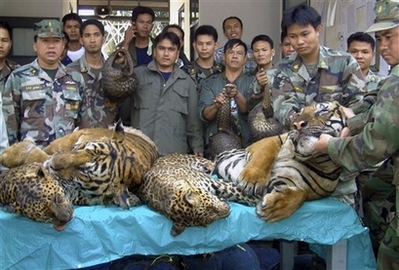 Some of the confiscated animals

BANGKOK (AFP) — Six slaughtered tigers and five leopards have been seized along with 275 live pangolins as traffickers tried to smuggle them across the Mekong River into Laos, the Thai navy said Wednesday.

The animals were being loaded off trucks and onto a boat when a navy patrol discovered them late Tuesday, Lieutenant Commander Teeranan Dangpun told AFP.

At least six people escaped into the forest, while others on the boat fled into Laos carrying four sacks believed to contain more animal remains, said Teeranan, who led the operation.

The six Bengal tigers discovered on the riverbank had been sliced in half, while the leopards had had their organs removed, he said.

“This is the second time we have intercepted wildlife being smuggled across the river to Laos. We suspect that the smugglers are all part of the same ring,” Teeranan said. In the operation last month, Teeranan said his team arrested seven smugglers and rescued 30 live pangolins.

All trade in Asian pangolins has been illegal since 2000. Their meat is regarded as a delicacy in China and their scales are believed to cure a wide range of ailments. “Information from those smugglers led us to this case. Otherwise, we would never have caught any of them,” he said. The remains were sent to the conservation department for analysis to determine where they were taken from, he said. The pangolins probably originated in Malaysia or Indonesia and were being trafficked through Thailand, he said.

A Thai wildlife activist, said the butchered felines were likely raised in captivity, because catching so many big cats in the wild was difficult. Tiger hunting is illegal worldwide.

Note By Edwin Wiek: “I was by coincidence about 3 kilometers from the place of confiscation when the navy arrested the traffickers. Had the chance to congratulate the Thai military on a job well done, and did talk to the chief for a while. Although they did a great job two boats with more wild animals did escape into Laos territory and there was no one on the Laos side to help out. The arrest came after an anonymous tip-off a few hours earlier and had nothing to do with any ASEAN-WEN investigation as mentioned in a few news reports a few days later. Unfortunately this trade continues as we speak…

STOP THE KILLING OF PROTECTED WILD ANIMALS FOR TOURISM!