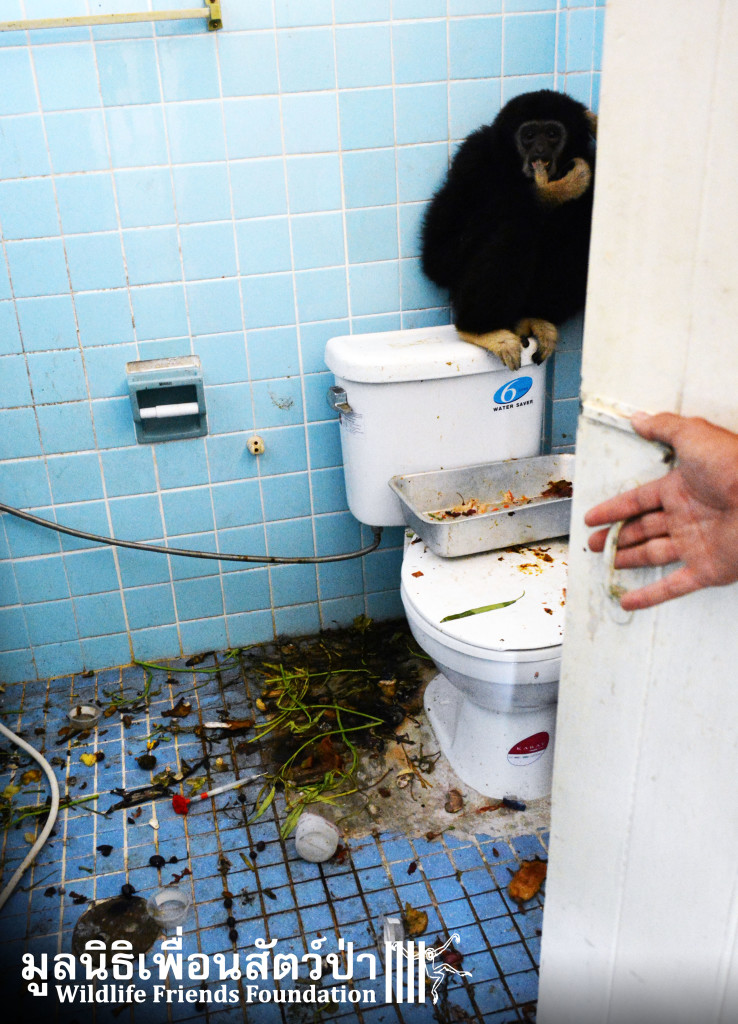 A young female gibbon was given to Mr. John, an expat living in a beach city in Thailand when she was only 6 weeks old. This little gibbon was taken from the wild just weeks before after her mother was killed. Her first owner was a Thai man who was seriously ill and for that reason handed over Alicia to Mr. John. John always wanted to give up Alicia to a wildlife rescue center or better release her to the wild, but was told at the official facility of the authorities nearby that they did not wish to take her in as they were full already with monkeys and gibbons, so “Alicia” stayed at his house for several years without John realising the existence of the WFFT wildlife rescue center. Years went on and Alicia grew larger and larger, showing some aggression to children and women, but she was kept inside a cage behind the home of Mr. John, away from strangers and potential trouble. She was fed a very good (and pretty expensive) variety of fruit and vegetables everyday, but solitary and lonely. A week ago “Alicia” finally broke free, making a hole in the roof of her cage, she got to the front of the house and jumped over the fence, threatening nearby children and jumping on the back of a neighbour. Mr. John rapidly tried to grab her by the legs to prevent her from attacking the children but got very badly bitten by “Alicia” in his hand and wrist. Severely bleeding John was able to get Alicia into the toilet of a guest-room in his garden and locked the door, locking her up, before getting to the hospital for treatment himself. After returning home that evening he could not handle Alicia anymore nor was he able to fix her cage that was rusted on many sides.

For six days he tried to find a solution, visiting the government rescue center nearby one more time and contacting many friends for help. Finally on Friday morning he went to the WFFT wildlife rescue center for help, and the wildlife rescue team immediately accompanied him back to his home to rescue Alicia from the toilet and relieve Mr. John of his responsibilities.

Alicia arrived at the WFFT rescue center on Friday afternoon and is now kept at the quarantine center where she met “Sek Loso”, another recently rescued male gibbon.

Emergency macaque caesarean
Watch the video of Nam Phon's emergency caesarean and Simba's birth. If Nam Phon had been left out in the wild on her own, both her and her baby would have died.
Update on Daisy: electrocuted macaque
Daisy was horrendously electrocuted and lost three limbs. She is now the boss of her very own little troop of orphaned babies.
New arrival: macaque with terrible leg injury
A poor wild macaque, who we named Tuk Tuk, was hit by a car and her leg was completely shattered.
Copyright Wildlife Friends Foundation Thailand - All Rights Reserved - | - GDPR Privacy Our Policies
Back To Top
This website uses cookies to improve your experience. We'll assume you're ok with this, but you can opt-out if you wish. Accept Reject Our Policies
Privacy & Cookies Policy