On Friday the 2nd of November 2012 a parliamentary committee visited the WFFT wildlife rescue center and Elephant refuge, on invitation of the Foundation. The invitation was send by Noi and Edwin to show the work, facilities and objectives of the foundation first hand to all members of the committee. It was found absolutely necessary to make this visit and meeting at the center happen as the Director-General of the Department of National Parks (DNP) had informed the committee in writing and verbally that WFFT had (quote) “dirty and small enclosures, no proper medical facilities or vets, inadequate food and encroaching on protected forest land” (end quote).

We at WFFT had a great opportunity to show the truth to all Members of Parliament within the 2 hours at the center during a presentation given by Edwin and an official meeting right after that with the following departments and officials present;
President and vice president of the Parliamentary committee on Law, Justice and Human Rights.
Members of Parliament of the PhueThai party, Democrat party and Bhumjaithai party.
Legal advisory team of Parliament.
The Governor of Petchaburi.
The Provincial Police Chief and his deputy.
The District Chief.
The District Police Chief.
The Sub-district Chief and Village Chief.
The arresting team of the DNP.
President and staff of the Thai Animal Guardian Association.
The complete board of the WFFT.
Veterinarians of WFFT and other organisations.
President and members of the “Rak Ling” Foundation in Lopburi.
The abbot of Kao Lookchang temple.
Supporters of WFFT from Bangkok. 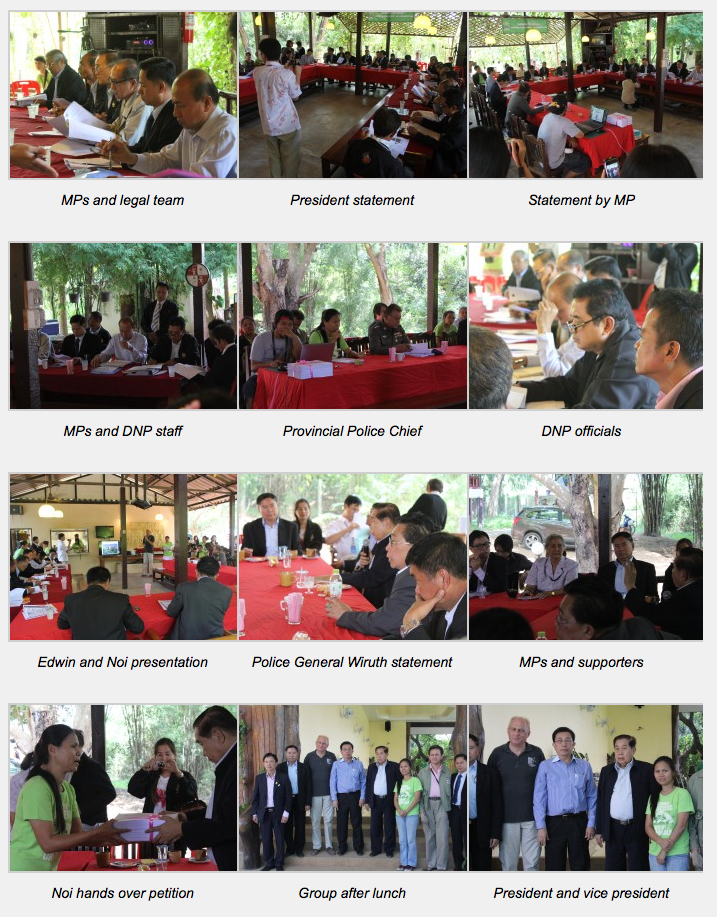 Members of the committee listened to the presentation by Edwin, Noi and Khun Roger (ThaiAGA), Doctor Teui, Doctor Two, and supporters of WFFT. Some of the witness statements on the days of the raids including the videos that were shown created a lot of emotion again with staff and supporters of WFFT. Some members of the committee were visibly disturbed by the use of violence against the animals. After Edwin concluded the presentation where he showed video (Thai Language Video) evidence of neglect by the head of wildlife of the DNP, video of involvement of local citizen catching animals, and lies by Damrong Pidech towards Noi, there were lots of question by the committee. After answering those questions the committee interrogated the arresting officials of the DNP, while their director (again) failed to show up.

Questions asked to the DNP officers where; DNP said that WFFT bought, sold and tortured wildlife, do you have any evidence of this? The answer was no, we got this through a telephone call. Does the DNP have medical facilities such as WFFT on any of their rescue centers yes or no? The answer was No we do not have any at all.
Does the DNP care well for all confiscated animals? The answer was yes, but we moved all animals to 5 different centers in the country. Can you show us how they are being kept at the moment? the answer was, no. Questions were asked why the DNP raided the center again and again without a search warrant, answer was we thought we wouldn’t need one. Why was WFFT not allowed to visit their animals? Answer was we don’t know. More questions were asked that we will include in a more detailed report later on our webpage.

The meeting was ended with statements of 5 Members of Parliament, which we felt were given us finally some justice. We had expected some positive back-up but we were not prepared for the unanimous conclusion we received.

The president of the committee stated that he hoped that DNP and WFFT would be able to cooperate and communicate in the future for the benefit of the conservation and welfare of wildlife, but made it clear that he felt laws should be used to benefit society and should not be used as a tool to get back at opponents.
The vice-president siad he as appalled by the use of force and injustice by the DNP and said all this misuse of power would soon be irrelevant as the DNP would be urgently dissolved, due to abuse of power and several ugly cases and incidents by the retired director-general and high ranking officials over the past years. He too mentioned that the raids on WFFT were given an extremely bad reputation the Thailand as a country, especially ahead of the CITES conference in March 2013 in Bangkok.
The MP of the Bumjaithai party asked if a hospital for people should be raided and closed down if an illegal immigrant was treated in there? The DNP said no to this question, reasoning people have feelings. The MP then asked them if wild animals have no feelings at all? to no reply…
The MP of the Democrats for our province, Petchaburi, said he had serious doubts about the real reason behind the raids against WFFT, he told DNP official that he could hand over hundreds of names of people in our province who are involved in wildlife trade, encroachment and other crimes on natural resources. He said he did not think the DNP would act on this as much as they had wasted time, manpower and money on raiding the WFFT. He further did say he had heard lots of accusations by the officials but had seen zero to no evidence to sustain this and urged them to hand this over ASAP for consideration.

A group of Thai veterinarians made a statement that they feel that any animal in need of help should be helped by a veterinarian and that it doesn’t matter where this is done, even a facility such as WFFT should not be raided for helping wild animals, but instead supported.

The committee will take the matter further on from now and has asked WFFT to write an amendment proposal to the laws together with ThaiAGA and ENP to protect wild animals and the people that try to save them, making sure this kind of issue will not happen again. The committee has ordered the DNP to hand over NEW pictures and descriptions how ALL confiscated animals are being kept at THIS moment. Video clips and further evidence will be handed over to the committee, the next meeting is probably at one of the 5 centers of the DNP where WFFT will be allowed to finally see the confiscated animals.

A more detailed report will follow soon, to be updated on this page.

Today is World Wildlife Day! In WFFT’s 18 year history, we have rescued, rehabilitated, and…

Take a look at the Temple Animal Rescue Mission from last month. Check out the…