“The court did not check on papers and other evidence of the defendant as it believes
that Thai government officials always work straightforward, with full integrity”

The above sentence made Edwin Wiek’s and Jansaeng Sangnanork’s ears buzz… It was one of the sentences read by the judge from a bloc note, written by hand and not yet officially signed or validated. It was however part of the “complete” verdict in Petchaburi provincial court on Thursday the 27th of June 2013.

Here is the story as we remember it, word by word. We can only repeat what we have heard in court today as the verdict was not yet typed out on official paper and only exists as a hand-written note by the judge and neither the defendant nor the Dutch embassy official present at court could get a copy of it. Strange as we were told 3 days earlier that “the verdict is on the way back from the regional court headquarters where it was verified and signed, but will not arrive before noon of this day (Monday 24th of June 2013) , so “please come back in 3 days”.

“The court finds all three defendants, Jansaeng Sangnanork, the Foundation and Edwin Wiek, guilty of possession of protected wildlife found on the 13 of February 2012. This court has taken the statements of two government officials (of the DNP) and believes these statements must be correct. The court did not check on paper and other evidence of the defendant, as it believes that Thai government officials always work straightforward, with full integrity. The court rules it has not considered any evidence that was handed over after the 13th of February 2012, no paperwork, video evidence or any form of other argument. Court sentences all three defendants to a fine of 30,000 Baht each and a jail sentence of 1 year. As the court feels the three defendants are of great service to society with their work of saving animals and have no criminal record at all the sentence will be reduced to 30,000 Baht each and a suspended jail-term of 1 year under probation time of 2 years. The foundation can continue its work of rescuing wildlife but must make sure laws are obeyed and should discus with relevant authorities.”

The above ruling is (to say the least) strange and according to lawyers and lawmakers in Thailand pretty unique. The following thoughts come up; why was the verdict reading delayed with 3 days with reason that the documents were on the way back on the 24th, and was the complete verdict instead read from a hastily hand-written note on the 27th of June? Was there no verdict yet on the 24th, or was the verdict changed for some reason? Why has court decided to blindly believe the arresting DNP officials on their word, while completely ignoring all evidence provided by the three defendants? The videos (in HD quality) showed clearly that the DNP head of wildlife had received all paperwork of DNP over the last 7 years but had “forgotten” to check on the animals and did not update his files ever, a discussion between him and his big boss Damrong Phidet was recorded on tape and handed over to court as evidence. The court also ignored paper evidence where defendants showed that they had registered animals with the DNP regional office and the replies from the DNP regional office to WFFT acknowledging the receipt of these papers, why? It was so clear that the DNP had ignored their duty for so many years. Another thought of course that comes up is, why go to court at all? If the provincial court feels that government officials always work straightforward, honest and with full integrity and court will just ignore the evidence provided by defendants there seems to be little reason to take people to court, let’s just let the officials be policing and judging themselves, right? Is the justice system in Thailand independent or in some cases under pressure from outside? Answering this question might be seen as insulting the courts.

Expecting a verdict where the three defendants in the provincial court are found “not guilty” after all the media attention the case got in and outside Thailand would have been wishful thinking. The loss of face of very high-ranking officials would have been a major embarrassment for both authorities and some politicians that are involved in the illegal wildlife trade, so instead the three defendants received now a verdict where everyone “is finding a good way out, where everyone has saved face and dignity, all are happy”.
An official at the court told Edwin and Noi “the small fine is no problem for you at all, the suspended jail-term a slap on the wrist and the foundation is told to continue their good work for Thai society! Great for everyone!”
Basically this is what you should expect when you get in to trouble with government employees, no justice, but a diplomatic way out to safe face for everyone. Important to note too is that with a “guilty” verdict the defendants cannot countersue the authorities, which should have been a face losing event for the ex-chief of the DNP and costly to the department. A few good points are that at least Damrong did not get his way with getting Edwin in jail for at least 2 years, closing the foundation and with the numerous other accusations he made against WFFT, they were all found groundless and were dropped by police and court over the last year.

So the ruling of the court was an easy way out for all parties?

Edwin and Jansaeng have decided to appeal the verdict, the fine is not huge, but it takes again money away from the animals where it really is destined for, furthermore authorities can if such verdict is accepted continue to harass people with good intentions and continue to squeeze money away from charities with the threat of raids and arrests. A court of appeal will be more independent as it is located in Bangkok and judges are more experienced and with less pressure from other departments. We have spent a fortune on our legal battle and struggle to receive enough donations to continue our work, but we have come this far so we need to fight on!

The animals that were rescued and need care deserve the best care and environment possible; the ones confiscated are currently not receiving this, so the fight has to go on. 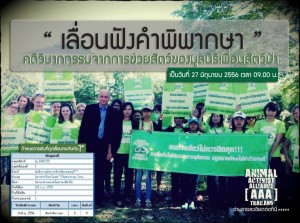 Two new arrivals: African Pygmy Hedgehogs
Two new victims of the wildlife trade arrive at our sanctuary. African Pygmy Hedgehogs are not pets!
May and June 2022 Highlights
We welcomed the final tigers and bear from Phuket Zoo, and had many other urgent rescues and new arrivals.
April 2022 Highlights
Last month we welcomed new rescues including three Phuket Zoo tigers and one bear and much more!
Copyright Wildlife Friends Foundation Thailand - All Rights Reserved - | - GDPR Privacy Our Policies
Back To Top
This website uses cookies to improve your experience. We'll assume you're ok with this, but you can opt-out if you wish. Accept Reject Our Policies
Privacy & Cookies Policy