WFFT investigation part 1
Over the last 2 years we noticed an increase of imports of monkeys into Thailand, mostly quietly shipped by air, monkeys of many different species shipped from South-Africa, Brazil, Guyana and Surinam. Most commonly traded monkeys are Marmosets, Squirrel Monkeys, Tamarins and Capuchins who are listed as appendix 2 species. 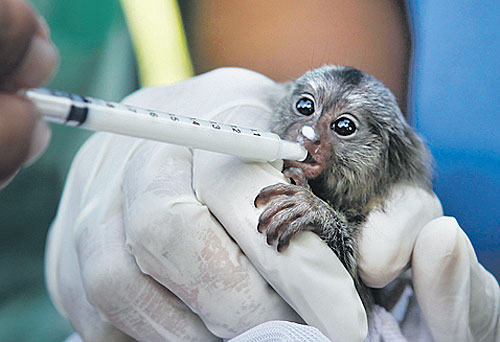 Although Thailand is a signatory to CITES (Convention on International Trade in Endangered Species) many animals are “legally” imported into Thailand with CITES licenses claiming that the animals are part of animal-exchange programs between zoos, however after investigating the issue over the last 6 months we have found that most monkey shipments imported in to Thailand have actually ended up in the pet trade, with Thai blogs and discussion sites being the trading place. 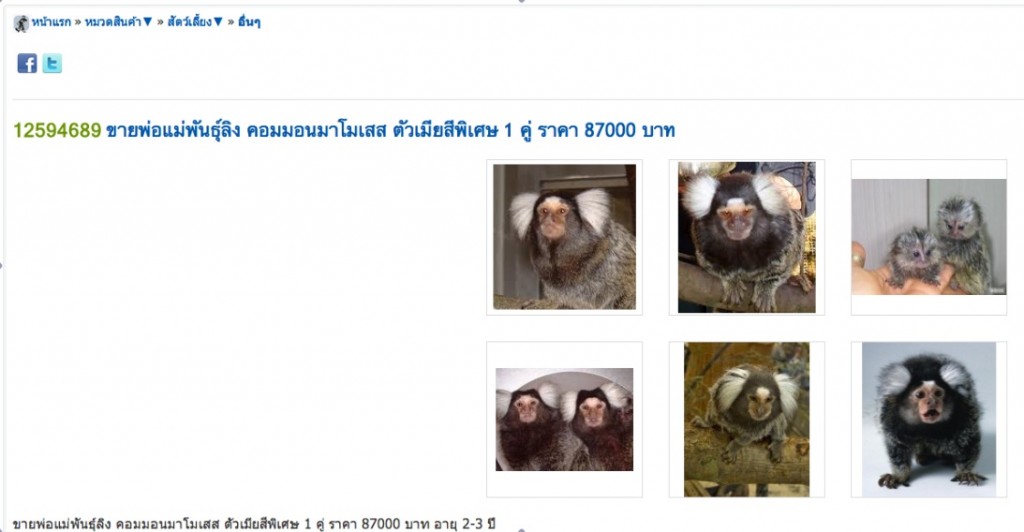 In June 2012 WFFT was alerted by a Dutch organization AAP and articles in the Dutch media that a shipment with 39 white-handed Tamarins arrived at Amsterdam airport with a KLM flight, where 13 were found dead in the 3 crates they were shipped in. Two more died during a two day period the Dutch authorities kept the shipment on hold at Schiphol airport before allowing the shipment that originated from Paramaribo, Surinam on to Bangkok, Thailand. Reason given by Dutch authorities at Amsterdam airport for allowing the shipment to continue was that shipment and papers were all in order, and all monkeys were to be shipped to a proper zoo in Thailand. It was only a few days after arrival in Bangkok that a large quantity of the same species (white-handed Tamarins) was being offered on the website Pantipmarket.com as pets for a price of US$ 3,300 a pair along with other monkeys that were imported only a few weeks earlier from South-Africa. Dutch authorities did not respond to questions why in total 15 monkeys (40%) died within 48 hours in a shipment that was “in order”. We have submitted questions to KLM airlines on several issues including their stand regarding future shipments of monkeys and hope to receive a reply shortly.

Hereunder the advertisement that was posted online early July 2012 on www.pantipmarket.com

Although most endangered wild animals are protected under the CITES treaty against international trade we have been told by officials of the Department of National Parks that these animals are currently not protected by National laws and that trade within the country in foreign wildlife can’t be tackled yet. “The monkeys are sold at relatively high prices” one of the traders told us “not because the profit is high but due to the fact that a high percentage dies during transport or soon after arrival.” Up to 50% is dead between departure of origin and one month after arrival.

It is difficult to get face to face with the traders; although they claim to do nothing against the law they only sell their products online and at the Bangkok weekend market. Their offices and official address on import-permits are usually non existing, such as the head-offcie of a major importer of monkeys from South-Africa on the picture hereunder. One of the people advertising monkeys online said half of the monkeys sold go to the richer middle-classes, but another 50% are sold on to foreigners, mostly Chinese and Middle-Easterners that hand-carry the little creatures out of the country by air through Bangkok airport (see top photo). In some cases illegally imported CITES appendix 1 species are being mixed with the more common and legally traded appendix 2 species, with customs or CITES officials at the airport not being aware or turning an eye on the shipments.

Documents in possession of WFFT currently show a number of over 600 monkeys imported in the last 12 months from Guyana, Surinam, Brazil and South-Africa. We feel this is probably just the top of the ice-berg. Prices of the monkeys range from 1,000 US dollars per head up to 4,000 dollars for the more “exotic” or rare species. We are looking in to the trade in Lions, Giraffes and birds at the moment.

WFFT would like to continue to investigate this trade, and the recent increase of shipments of (hunting trofee) Rhino horn that arrived at Bangkok airport lately, further but is lacking funds to do so.

Advertisement for Pygmee Marmosets as pets

The Plight of the Tiger – Commodification of a Giant: Panel Discussion

Thank you to everyone who attended "The Plight of the Tiger - Commodification of a Giant: Panel Discussion" on June 19th.

Every month we give the largest otter pool at WFFT a big clean. All the…