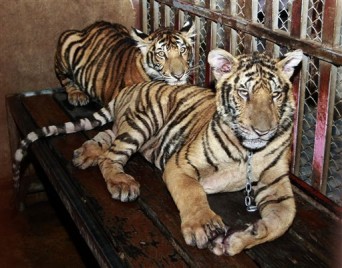 A man has been arrested and accused of illegally raising six tigers on top of an apartment building on Bangkok’s outskirts after neighbors complained to local police about bad smell coming down from the rooftop. A 28-year old person caring for the tigers was initially arrested at the apartment building, as the owner was not on site and seems now to be on the run from police.

The 6 tigers, 4 adults and 2 cubs were moved from the rooftop the next day, tuesday 11th of September to a government facility in Ratchaburi awaiting further investigations on where the tigers originated from and whether the owner was illegally trading wildlife or just keeping them as “pets”. We believe the owner nicknamed “Yo” has been delivering tiger carcasses and body parts such as genitals, bones and fangs to the border with Laos over the last few years, and that at least 2 more cubs are being kept hidden elsewhere. 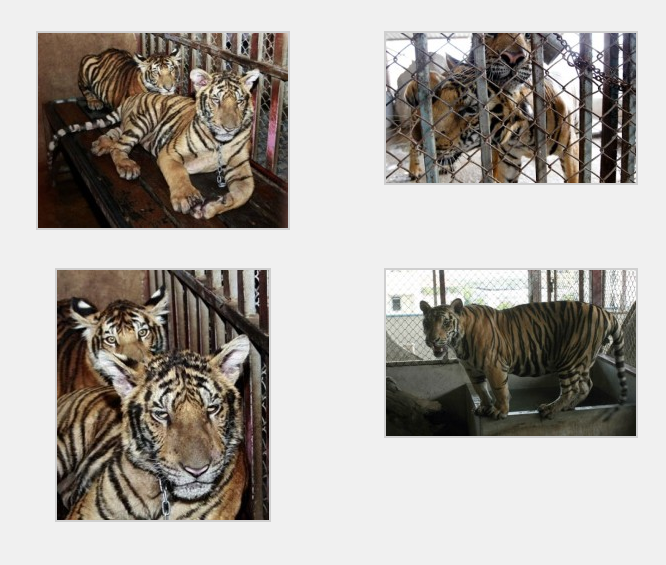 WFFT has complained about the tigers in this place in October 2011 without any action seen taken by authorities at that time.

Phuket Zoo Tiger Health Check
Phuket Zoo rescued tiger, Baithong, recently had a health check at WFFT. She is an older female tiger who has spent her life in captivity.
Rescued Tigers, Pong and Pang, successfully integrated!
Half brothers, Pong and Pang, have been successfully integrated! These Phuket Zoo rescued tigers may be related, but Pong and Pang are like chalk and cheese.
Phuket Zoo tiger and bear rescue
The Phuket Zoo tiger and bear rescue was the biggest rescue in WFFT's history. See how their lives have changed!
Copyright Wildlife Friends Foundation Thailand - All Rights Reserved - | - GDPR Privacy Our Policies
Back To Top
This website uses cookies to improve your experience. We'll assume you're ok with this, but you can opt-out if you wish. Accept Reject Our Policies
Privacy & Cookies Policy