KANCHANABURI : The National Parks, Wildlife and Plant Conservation Department has asked Wat Pa Luangta Maha Bua to bring under control the population of tigers in its care to curb a dramatic increase in their numbers. 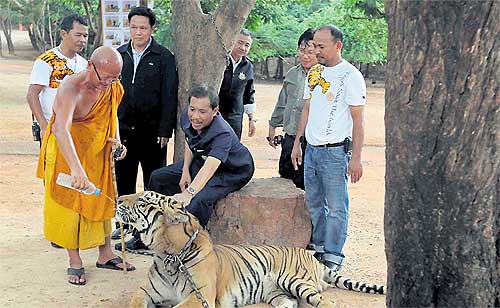 National Parks, Wildlife and Plant Conservation Department chief Damrong Pidech pats a tiger at Wat Pa Luangta Maha Bua, as the temple’s abbot gives the big cat water to drink. A total of 99 tigers are being kept at the temple in Kanchanaburi province. PATTANAPONG HIRUNARD

Damrong Pidech, the department chief, yesterday visited the temple’s tiger zoo, well-known among tourists in Kanchanaburi, after a complaint that the temple was profiting from the animals by allowing tourist visits. “I have come here to take a look at the living conditions of these tigers,” he said. “Frankly speaking, their living conditions are better than those in state-owned zoos.

“If I move them out of here, I am afraid their living conditions might not be as good,” Mr Damrong said.

He said the department needed to closely cooperate with the temple to curb the tiger population. He was concerned a rapid increase in tiger numbers will pose an added burden for the temple.

“As far as I know, the temple has a veterinary team to control the tiger population. The abbot told me he will separate male and female tigers during mating season,” he said.

In 2001, the department found the temple was keeping seven tigers illegally. The department allowed the temple to continue taking care of them, while declaring them illegal possessions. Since then, the number of tigers at the temple has soared to 99.

The temple’s abbot initially refused to allow officials to enter the zoo yesterday, fearing the animals might be taken away. He eventually allowed them in after 20 minutes of negotiations.

Phra Vissuthisaradhera, the abbot, said that he disagreed with the department’s plan to reduce the tiger population by transferring some of them to state-owned zoos or wildlife breeding centres.

“I am not sure the new places will have good conditions like this place. We are very close to the tigers. The animals may suffer from stress if they are taken away,” he said.

The department could control their numbers through birth control but then it would have to carry out the job by itself.

The temple spends 400,000 baht a day buying chicken carcasses to feed the tigers. About 150 tourists, mostly foreigners, visit the temple weekly. The temple charges a 300 baht entrance fee for Thais and 600 baht for foreign tourists.

This brings in about 84 million baht a year for the temple. The temple’s tiger zoo is located on 30 rai of land. The temple has spent about 100 million baht building cement cages and installing closed-circuit cameras to monitor the animals.

A department source claimed the temple has no intention of controlling the tiger population as having lots of them is good for business. There are 1,328 tigers at zoos nationwide, with 143 of them seized from illegal traders. The country has about 200 tigers living in the wild.

We are happy that the DNP finally looked into the complaints about the tiger temple and the extreme breeding policy of the temple over the last few years. As the first 7 tigers were found and confiscated in 2001 it took the department 11 years to see that the breeding and exploitation has gotten out of hand with right now 99 tigers at the temple while dozens more have died or disappeared over the years. Most tigers suffer problems from generations of inbreeding as they all originate from only 4 tigers that were bought by the temple in 1999 from an elephant camp and a tiger breeder.
Some of the figures in the news article of the Bangkok post do not add up however. The temple claims to spend 400,000 baht a day on feeding 99 tigers, which would mean the tigers would eat 4,000 baht a day of chicken carcasses, that would mean they eat each 80 kilos of chicken a day! Tigers are known to eat only up to maximum 5% of their body weight per day, about 5-7 kilos on average. This would mean that even if they had beef everyday it would cost no more than 600 baht per day per tiger or 60,000 baht. If they eat chicken it would not be more then 35,000, instead of the 400,000 per day mentioned. It would put the cost of caring for the tigers at about 12 million baht a year.
Furthermore the issue of 150 paying visitors a day; Actually on average 300-400 people visit the temple each day at 600 baht per person which would bring in about 75 million baht a year, not including the “close-by” experiences of making photos with the tigers and sales of souvenirs, which is a considerable amount as well. The total income might be higher then the already stunning 84 million mentioned in the article. The amount of Thais visiting the temple can be ignored, they do not fall for the “miracle of conservation” at the temple and see it more as exploitation. Looking at the total income against the expenses caring for the tigers you can see the profit in the millions a month.

Mr Damrong Pidech was right that confiscating the tigers and taking them to his wildlife rescue centers would be not good as his facilities are worse than the situation at the temple is, it is however not right to state that state owned zoos do not care well for the tigers as some zoos have over the last years upgraded big cat facilities considerably, there are just too many tigers in all zoos with no space available. Confiscated wild animals such as gibbons, monkeys and elephants recently died under the care of the DNP as their centers were not equipped with medical facilities to treat the animals on-site.
Separating tigers in mating season might be a way to stop tigers in the wild from having offspring, however tigers in captivity mate all year round and have sometimes offspring 3 times in 2 years time. It would not stop the breeding at all. Spaying the tigers would probably be the best way to stop the breeding, all tigers found at the temple are cross-bred specimen and would have no conservation value, nor can they ever be released to the wild. The unnamed DNP official that said the temple would probably not stop breeding is right; the temple makes a fortune out of the bottle-feeding and photographs with tourists every day.

Thailand is obliged to stop the breeding of tigers in breeding facilities and zoos as per agreement of the Convention on International Trade in Endangered Species (CITES) that Thailand as a range country has signed several years ago. Thailand is considered to be the biggest illegal wildlife-trading hub in Asia, possibly the world. Thailand does not only have about 1400 tigers in zoos but it is estimated that at least 300 more tigers are kept illegally around the country for trade and as pets.

Another interesting story on the tiger temple is found here

(a story in the Nation on the same day)

Police have arrested the landlord of an apartment building in Klong Luang district in Pathum Thani, where six tigers were kept caged. 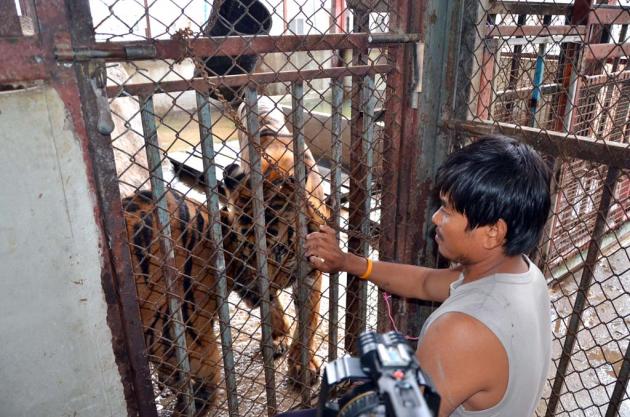 Police and environment officials found five males and one female tiger in three cages on the rooftop of the five-storey Ritthibundit Apartment block. They arrested Surasak Boonthienthong, 29, who presented himself as the landlord and owner of the tigers.

Wildlife officials in Ratchaburi have been contacted to take the tigers and check their DNA to determine their origin. The arrest stems from a previous wildlife-trade case in Nonthaburi’s Bang Kluay district.

***// Additional news October 2012 – The owner of the tigers has not been charged, and he still has 6 tigers on the roof of the same building. //

Phuket Zoo Tiger Health Check
Phuket Zoo rescued tiger, Baithong, recently had a health check at WFFT. She is an older female tiger who has spent her life in captivity.
Rescued Tigers, Pong and Pang, successfully integrated!
Half brothers, Pong and Pang, have been successfully integrated! These Phuket Zoo rescued tigers may be related, but Pong and Pang are like chalk and cheese.
Phuket Zoo tiger and bear rescue
The Phuket Zoo tiger and bear rescue was the biggest rescue in WFFT's history. See how their lives have changed!
Copyright Wildlife Friends Foundation Thailand - All Rights Reserved - | - GDPR Privacy Our Policies
Back To Top
This website uses cookies to improve your experience. We'll assume you're ok with this, but you can opt-out if you wish. Accept Reject Our Policies
Privacy & Cookies Policy