Police General Norasak, commander of the NRECD (Natural Resources and Environmental Crime Division) of the Royal Thai police yesterday raided a restaurant on Ramintra soi 117 in Bangkok. The restaurant named “Mae Bia” owned and run by Miss Usa Poophayom (36 years), was WELL-KNOWN for a long time for having wildlife on the menu. Another person, a Mr Suthat (50 years) who entered the restaurant during the raid to buy snakes was taken for questioning by police.

A short list of confiscated goods at the restaurant includes 29 Burmese pythons, parts of 2 tiger skeletons, 60 birds of different species, lots of soft-shell and other turtles and processed meat of wildlife. The total value is set between 250,000 to 500,000 Baht.

The owner, Miss Usa, claimed she bought most animals per weight ranging between 200 to 300 baht per kilo, from different people working for rescue foundations working in Bangkok. Two large foundations and one government department are often called to remove snakes and other wildlife from peoples houses, to rescue and release them elsewhere. Police has for now not released the name of the foundation or units involved in the illegal wildlife trade. 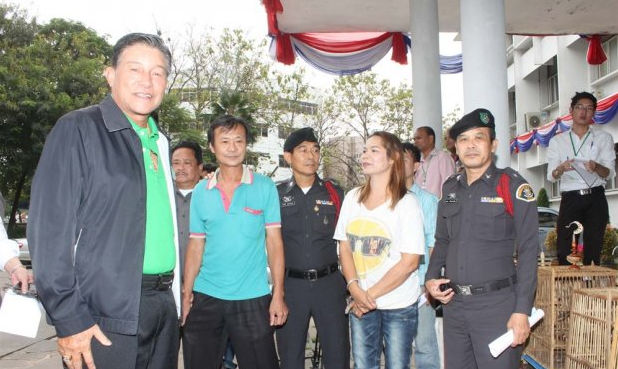 Two owners of the “Jungle Restaurant” presented by police

WHile police believes all wildlife found at the restaurant was to consumed there by “foreign” customers, the owner declared that lots of people bought the animals from her to release them at temples for merit-making. (WFFT Note:both claims are hard to believe) Confiscated pangolins returned to the wild!

Today is World Pangolin Day. Did you know that a pangolin is snatched from the…