The scandal about the police colonel that was caught hunting for protected wildlife in a national park has not blown over yet, or another scandal has emerged. On the 2nd of February the provincial police of Chumporn (Patui district) stopped a police captain in an official vehicle belonging to the Sadao district police in Songhkla province with about 400 kilos of elephant tusks on board on the highway from the Malaysian border towards Bangkok. The police captain had no legal paperwork for the tusks in his possession, but claimed at first it was “just” local ivory of domesticated elephants. The trade in ivory within the country is legal in Thailand if it is from domestic elephants. Chumporn police however did not believe his story and found out contradicting stories during interrogation. The police captain later admitted he smuggled the tusks in from Malaysia.

The police captain risks to be immediately expelled from the police-force according to the Songkhla provincial police chief, Police Major-General Suwit Chuensiri, especially given the tight evidence found and seriousness. The police captain could be prosecuted for smuggling and possession of wildlife (parts) and theft of the minivan belonging to the state. The total value of the ivory in this bust is estimated at US$ 330,000.- (estimated by authorities).

WFFT will have to further monitor the case, as several questions remain;
will he be prosecuted?
Where did the ivory originate from?
Where was it supposed to be delivered? 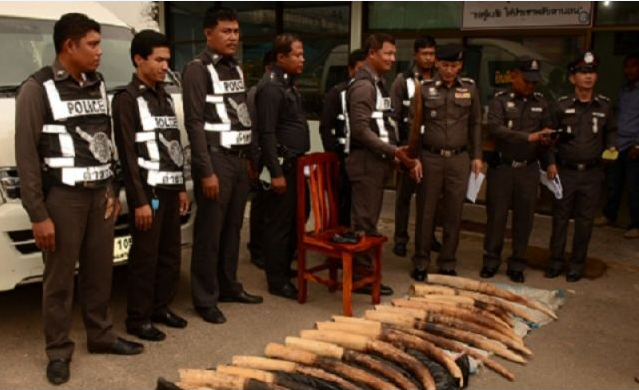 Tusks and minivan on display at Chumporn police station