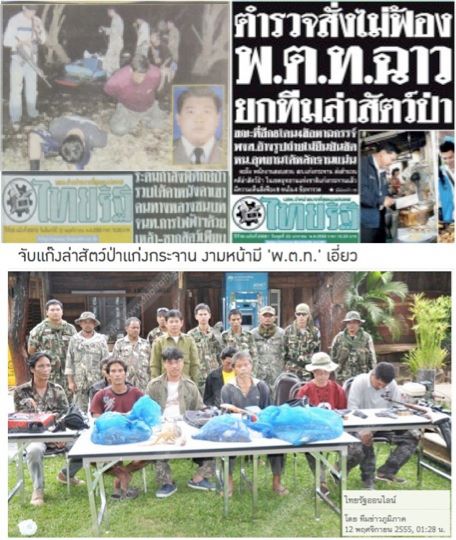 outcry in Thai newspapers and on Social media

The National Parks, Wildlife and Plant Conservation Department will send a legal team to help mount a case against a senior police officer who was allegedly caught hunting protected wildlife. The move follows a public outcry over the decision not to charge Pol Lt Theerayuth Ketmangmee, who was arrested on Nov 11 with eight others on suspicion of hunting in Keang Krachan National Park. The suspects were arrested with several weapons, a dead mouse deer and about 100 giant Asian river frogs. All of the alleged hunters have since been indicted except Pol Lt Theerayuth, with police saying there was not enough evidence to charge him. Pol Lt Theerayuth is the chief of an interrogation unit at Pran Buri police station in Prachaup Khiri Khan province.

Parks Department deputy chief Theerapat Prayurasiddhi said yesterday that a legal team would be formed to help Kaeng Krachan park chief Chaiwat Limlikhit-aksorn gather evidence against the police officer. Mr Theerapat said the department had photos of Pol Lt Theerayuth’s camping site in deep jungle during the alleged hunting trip. The site was about 50km from the park’s tourist centre, he said.

The department recently showed the media photos of the alleged hunting party posing for photos with animal carcasses. Mr Theerapat said he was confident the evidence that park officials already had would convince prosecutors to indict Pol Lt Theerayuth. The evidence would be submitted to prosecutors next week, he said.

Mr Theerapat also called on the public to monitor the case to ensure no backroom deals were made. Parks Department chief Manophat Huamuangkaew yesterday said he had instructed Mr Chaiwat to pursue the case against Pol Lt Theerayuth. “I don’t want to see law enforcers becoming law breakers,” he said.

Deputy national police chief Pansiri Praphawat has been also reviewing the police force’s handling of the case to clear public doubt over the investigation. Pol Gen Pansiri said he would reveal his findings in the next few days.

NOTE 28 Jan 2013: WFFT has officially complained to the Petchburi prosecutor about this mis-handling of the legal case and accused the prosecutor and police of severe neglect in this matter. WFFT believes that especially officers of the law should set an example and that any wrongdoing cannot be tolerated. For a highly ranked police officer like this a 4 year jail-term and dismissal from the police force is the minimum required penalty.

UPDATE 30 Jan 2013: Prosecutor says he lacks evidence to take case to court, seems to be too busy finding more reasons to charge animal rescue people instead! We will petiotion the governor for urgent dismissal of the prosecutor, citing negligence.

UPDATE 03 Feb 2013: Kaengkrachan district chief is the first one to be moved to inactive post after he was found covering up the case protecting the interest of the police officer accused of poaching. We expect the provincial prosecutor to be next. NEWS STORY THE NATION

Sugar glider handed over to WFFT

How confiscated wildlife and their parts should not end up

Confiscated ivory and other wildlife (parts) stolen and sold on! We often read news…

“Elephant exploitation in Thailand” by AAA

A story written by “AAA Thailand”, a Thai group in reply to news articles on…