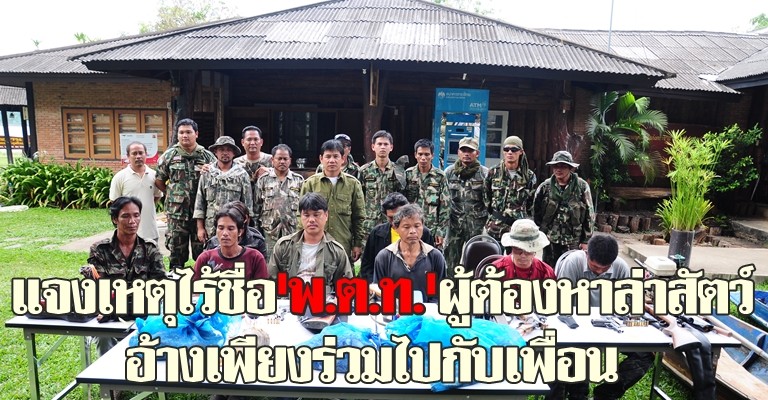 Caught poachers at the press conference at Kaengkrachan

Rangers of Kaengkrachan National Park caught 9 poacher red-handed with over 100 collected mountain frogs and some small mammals such as mouse deer inside the National Park area. The poachers heavily armed with pistols and rifles. They were apprehended around 23:30 hours on the 10th of November. Soon after their arrest by park rangers it was clear that one of the poachers was a highly ranked police officer, Police Lt-Col Thirayuth Khetmangmee, second in command of Pranburi district police station. Pranburi district is about 70 kilometers from the Kaengkrachan National Park. In the night of the 10-11th November the poachers were charged with illegally entering the national park and poaching protected wildlife inside a national park, but not the police officer, who was only charged with illegal entry at that time.

Local media in Thailand broke the story two days later with photographs of the arrested group, with questions posted on several local blogs why the high-ranking police officer was not charged with poaching in the park. Not long after this the Kaengkrachan National Park chief, Mr Chaiwat Limlikhitaksorn told the press he would charge the assistant police chief with poaching as well, with serious suspicion he was actually the ring leader. Park rangers had been trying to trace down the group since the 8th of November when they received intelligence from an informant that a group of people with influential connections entered the park to hunt.

The police chief stated to the park chief and local police who took over the case, that he had met the poachers while hiking through the national park just joined them on their trip. He stated he did not know any of the people personal before. Not long after his statement however the park chief published photos from a confiscated camera where Police Lt-Col Thirayuth Khetmangmee was seen having a picnic dinner inside the national park with the 8 other suspects consuming protected wildlife a few days before.

On the morning of the 14th of November the police chief had still not been charged with illegal hunting of protected wildlife by local police in Kaengkrachan, much to the dismay of the National parks chief. In the meantime Police Lt-Col Thirayuth Khetmangmee threatened through his regional commander with suing the parks chief for selective enforcement and negligence, a very strange action in our opinion unless it is to threaten the park chief. Lt-Col Thirayuth in civilian clothes being charged on 14 November

Police Lt-Col Thirayuth Khetmangmee was being informed by local police of the charge against him at 4PM on Wednesday the 14th, dressed in civilian clothes and covering his face with sunglasses and cap. He denied to speak against investigators and media. The 8 other suspects include one more police officer of the railway police and one of the highway police department, a notorious district chief from Samut Sakorn province and an assistant village chief.

WFFT will follow up on this story and wish the park chief good luck and strength with the upcoming battle against corruption in this case. The park chief has stated to the media that he will resign if this case is not brought up to court, he has a difficult time ahead given the good connections of the accused. Poachers who killed 5 elephants and captured their calves in Kaengrkrachan national park at the beginning of 2012 were never found or charged.