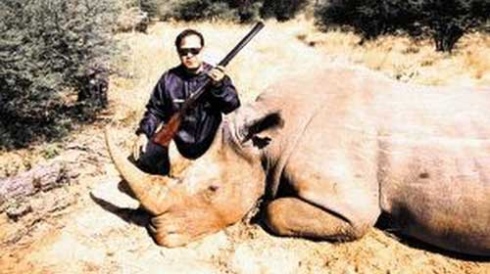 Chumlong poses with a killed Rhino in South Africa

A Thai national, Chumlong (or Chamlong) Lemtongthai, who pled guilty to organising bogus trophy hunts to sell rhino horns on the international black market was sentenced to 40 years in a South African jail on Friday. Chumlong Lemtongthai received the unusually harsh sentence from a Johannesburg magistrate court amid a record number of rhino poaching deaths this year, government prosecutors said. The man used Thai prostitutes to obtain “hunting licenses” and ship this horn legally to Thailand to end up as CHinese Traditional Medicines. Lemtongthai pleaded guilty to paying prostitutes who posed as hunters in order to harvest the horns, which were then sold on Asia’s lucrative traditional medicine market.
The group is thought to have netted around 26 rhino horns. 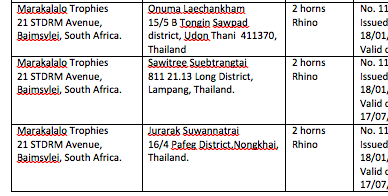 In handing down the sentence, the judge said he did not want his grandchildren to grow up without being able to see rhinos, according to EyeWitness News.
South African officials say 528 rhinos have been killed already this year, shattering previous records. All the accused on their first hearing day in court

National Prosecuting Authority spokesperson Phindi Louw welcomed the ruling. “It will send a strong message that as South Africans, we will do everything in our power to preserve our heritage,” she told AFP.
Video of the campaign in front of court

“We believe it’s an appropriate sentence that will be able to send a message that as a country we will never tolerate people who come in our country, unlawfully so, with the purpose of destroying our wildlife.” Lemtongthai can now appeal his sentence. Environment minister Edna Molewa had called for Lemtongthai to receive a “stricter sentence” than usual with the seeking a 260-year sentence.