Only tools of the DNP are lies and ungrounded accusations, while they hide behind their “laws”

The videos on YouTube on the animal abuse by DNP officials made headline news in Thailand and are even abroad being watched with disgust. One monkey was so hard hit on his head that he fell down from 6 meters high on the side of a cement pool and became unconscious and was drowning until he was taken out of the water with a net. The images were horrible and have been viewed almost 100,000 times in one week! Thousands of people, especially in Thailand, added their “like” to WFFT’s Facebook page or commented about the abuse of the officials towards the animals.

The other side of the story however, is that the DNP is so badly embarrassed that they are now fighting back even harder, this time not only at hurting the animals, but also trying to damage the overall image of the foundation. Stories by some officials that we are supposed to be a phony foundation as we have changed our president a few years ago., another story that our medical facilities are sub-standard or even “illegal”. Adding even more insult to injury they also claim that our animals have no proper paperwork and that local people have accused us openly during the raids that we were taking profit from the animals and donations.

I would like to stress out in short the following, more supporting documents and photos will follow;

The WFFT is an officially registered foundation under Thai law, and has under these laws to submit a yearly financial statement, with monthly bookkeeping and evidence of all income and spending. If any foundation is found not to submit this full financial year report their foundation registration will be withdrawn. The WFFT has given full account over the past as requested and stipulated by law.

The medical facility of WFFT is of international standard with a fully operational treatment room and surgery facility, including gas-anesthesia, ultra-sound and incubators. The WFFT has invested a lot of funds in these instruments and the facility as a whole and is proud to be the ONLY rescue center in Thailand with a fully equipped facility on-site. We have a Thai veterinarian in charge of the clinic but we are still trying to find one more person for full time work here. The clinic is not illegal at all, as we do not keep prohibited medication here.

I would like to say again that we do have papers for ALL animals at WFFT but we were not given enough time on the first day of the raid, only 2 and a half hours for showing papers for 400 animals. It gave us 22 seconds per animal… impossible to deal with.

The people that were according to some newspapers here shouting at our staff and volunteers were actually from a zoo nearby, who had three elephants confiscated a day before. The Huahin zoo people threatened and punched our volunteers while the animals were moved out, and shouted insults. These people were not local villagers as mentioned.

On Channel 3 the director-general of the DNP also said that the WFFT is renting land of the Kao Lookchang temple at a monthly rate of 40,000 Baht (US$ 1,300) This is not correct, we actually own more then half of the land of the center as a foundation, while the first part of our center is build on temple land for which we pay an annual fee of 27,000 Baht (US$ 900), merely 2,300 baht a month.

One more concern for some people is the fact that the president of the foundation has changed from one person to another over the years. I would like to stress that presidents and members of any foundation have to change or be re-elected every 4 years. In the case of our (ex) president this was not possible, he died a few years ago, sadly at a too young age, from a stroke.

If anyone has more matters to discuss, please do not hesitate to ask me, I am ready to defend our cause with the truth. 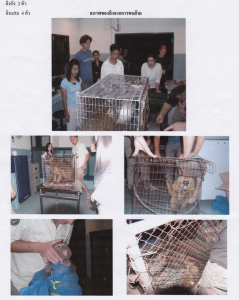 A Department of National Parks officer dumps wild animals at the WFFT wildlife rescue center close to midnight in 2004, some in bags. The officer did not leave any paperwork behind and a few days later Edwin Wiek fo the WFFT was arrested for illegal possession of wildlife, clearly a set-up by DNP.

Two new rescued endangered macaques
Our vet team is working hard to treat these rescued macaques, so they can return to the wild. Click to read more, and please help if you can.
October 2022 Highlights
New rescues including lorises, a macaque and other wildlife in need. Our supporters make our work possible. Watch our October 2022 highlights.
September 2022 Highlights
Rescued macaques move into new enclosure, Phuket Zoo bear gets a health check and more. Watch our September 2022 highlights.
Copyright Wildlife Friends Foundation Thailand - All Rights Reserved - | - GDPR Privacy Our Policies
Back To Top
This website uses cookies to improve your experience. We'll assume you're ok with this, but you can opt-out if you wish. Accept Reject Our Policies
Privacy & Cookies Policy