– A press release by AAA Thailand–

Wildlife will not receive protection from cruelty under new Thai animal welfare laws!

While Animal Welfare Bill is at the stage of deliberation, first time ever in Thailand, by the Ad Hoc Committee appointed by the House of Representatives. Unfortunately, there is no space for wildlife to speak out, their lives have been leaving behind and excluding from such Bill. If those animals have verbal language like human, they would be screaming out loud and asking for help through those bars but sadly, what they can do are wasting their breathes in tight cage or living their lives tied up with chains.

For those relevant parties who are taking seat in the Ad Hoc Committee’s meeting room and followers, it would be great if they keep their eyes and mind open to see problems more clearly. They would be noticing that a huge gap of laws gives wildlife a hell, they would be noticing that living in any confined spaces apart from their natural habitats is like living in an abyss of misery. So why? Why are they giving such lives up? Why are they excluding wildlife from having the rights to be protected and having proper welfare just like other animals? 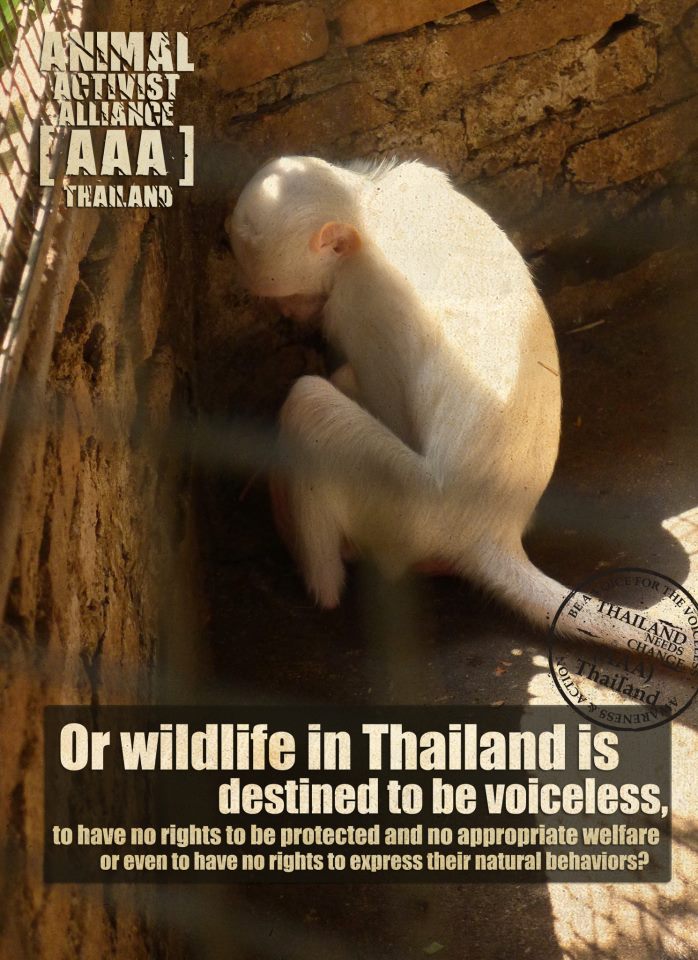 Since wildlife experiencing hell on earth cannot speak for themselves, hence we need to admit that such terrible truth happens to wildlife in Thailand. It is not the time to sweep the problems under the carpet, sitting there and do nothing with the laws but it is the time to carry out the deliberation of the Bill as good as we can. We need to be brave and get this matter straightforward. It could be said that existing Wildlife Protection Law in Thailand cannot guarantee and protect welfare of wildlife, such law allows persons to be legally possessing of wildlife. Furthermore, the story informed by some directors of wildlife conservation bureau to the Ad Hoc Committee is totally opposite to the truth happens in today’s world, even-though the Committee believes such story!!!!!!!!!!

Obviously, we cannot see through mind of those who are sitting in the Committee’s room and apparently, we cannot interfere with the deliberation of the Bill but we can unveil the secret of shame and make it clear and present it to the public in which people who is hiding behind shade never realize that it exists.

This week the WFFT Wildlife Rescue Centre gave refuge to an exceptional soul. Although our primary goal is to rescue wildlife, we believe that every animal life matters.

You may have seen the story of little Petal earlier in the week...? Just a…