A wild Indo-Chinese Humpback Dolphin or Pink Dolphin (Sousa Chinensis) has been found at a small zoo on the island of Koh Samui, a very popular tourist destination in Thailand. The dolphin is currently being trained daily to perform shows for tourists visiting the zoo in the near future. It is currently kept at a swimming pool at the zoos resort, the Samui Orchid Resort. 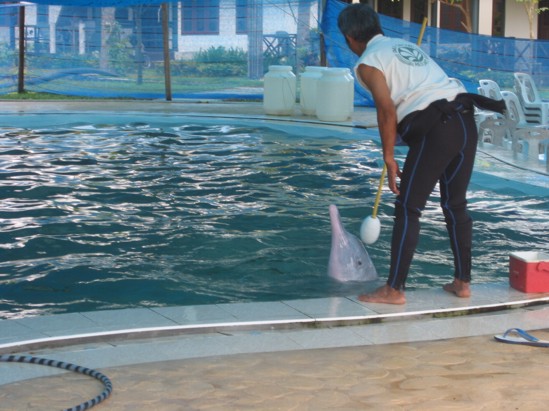 After investigating the reports from various people in southern Thailand about individuals trying to purchase wild dolphins in the last two years for aquariums and dolphin shows we found that in most cases the dolphins did not live for long after their capture. The animals are not easily caught and try fiercely to come loose from the nets. Most are severely injured causing infections that prove to be fatal and many more cannot be properly fed after capture, and as they do not drink water they die faster than most other animals due to dehydration. (Dolphins receive all of their fluids from their food.)

The dolphin at the Koh Samui zoo was according to the management brought in by fishermen after it got stuck in their nets and was injured three months ago. From the photos the dolphin looks fine, in as far as it does not seem to suffer from external injuries, so there is no need to keep it down there, but is daily trained by an experienced dolphin trainer as “it is in not tame enough and is scared of people”.

The Wildlife Friends of Thailand are very concerned about the increased use of illegal wildlife at tourist destinations over the last years. After a period of raid by officials before the CITES conference in Bangkok in October 2004 things were looking good for wildlife conservation and animal welfare but lately more and more reports of exploitation of wildlife (such as baby gibbons, snakes and birds of prey for photo-props) have reached us and were found true.

“The very fact that the animals is scared of people, yet is forced into close proximity to them on a regular basis, day after day is a major risk as regards the dolphin’s survival,” says zoologist and captivity expert, Dr Barbara Maas, Chief Executive of UK-based conservation group Care for the Wild International. “There is no doubt that this animal will be clinically stressed by this treatment and by being confined to a small pool. Stress in humans and other mammals, including cetaceans, lowers the body’s immune defenses, which renders it more vulnerable to infections. The fact that the dolphin is swimming in polluted water, containing its excrement and possible chemical water treatments, is unable to feed naturally and has lost its freedom is going to increase these risks. Care for the Wild International hopes that the Thai authorities will set an example and make good on their promise to release this unfortunate animal back to the wild where it belongs as a matter of urgency. Firstly, because it will increase the dolphin’s chances of survival, and secondly because it will send a clear message to those who deliberately catch dolphins in fishing nets and claim that it was accidental, that this kind of personal profiteering at the cost of the Thailand’s wildlife heritage, can not be tolerated.

If the dolphin on Samui Island is not released back to the wild it will probably end up as the next photo prop at the zoo, after the unfortunate sea-lions, birds and tigers. See examples at:
http://www.samuiorchid.com/samui_orchid_photo_gallery.php 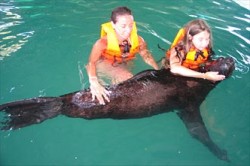 A similar zoo having dolphins in Thailand was founded 15 years ago in Chanthaburi Province with the “rescue” of one dolphin and currently houses over 20 wild-caught dolphins, a very popular attraction as people are allowed to swim with these endangered creatures.

Dolphins are Cetaceans, Cetaceans are mammals, meaning they have hair (though you might have a hard time finding it), bear live young and suckle them, are warm-blooded, and breathe air with lungs. There are 81 currently recognized species of cetaceans;­ whales, dolphins, and porpoises. The Indo-Pacific Humpback dolphin is a species under CITES appendix 1 and highly endangered. A similar dolphin was rescued by wildlife conservationists and government officials in Khao Lak, Phangnga province that stranded in a tin mine after the Tsunami hit the Thai Andaman Sea and successfully released back to the wild.

For press: Info about the zoo: www.samuiorchid.com

If you would like to protest about the capture of the dolphin you can do so to/at:

Another unbelievable story of abuse of power Mr Damrong Pidech has finally retired, but that…

We are getting closer to our target! WFFT would like to say huge thank you to everyone who has helped us raise $6581 for the new animal habitat urgent fundraising, but we still have a long way to go.