DNP chief still won’t get rid of double standards, or is this indeed a personal matter?

One week after WFFT was raided (February 13th till 27th) and animals were brutally chased and beaten by DNP officials and locally hired thugs there was another serious bust of wildlife trade ongoing in a province 100 kilometers from Bangkok; Sraburi. At this wildlife traders’ “safe house” over 300 endangered and protected wild animals were found including orangutans, monkeys, tigers, lions, red panda’s, camels, and much much more. The owner said he traded wildlife with the objective of one day opening a zoo. He had no zoo license, nor could he produce any documents of ownership for the wildlife found at his place.

The DNP that is part of the THAI-WEN and ASEAN-WEN (Wildlife Enforcement Network) seems to take this bust not too serious, but for what reason? When WFFT asked questions with both government agencies and NGO’s involved in the enforcement of wildlife laws we were told to keep things quiet, why? Should we be quiet so the trade can continue and some people continue their lucrative but despicable business? Or are some people too scared to speak up to conclude that the enforcement as is, is not working well? While WFFT is again attacked by the DNP this week with two raids on Tuesday the 28th and Wednesday the 29th of August we are asking these questions for JUSTICE!

See the clip of the radi at the zoo,
note that all these animals are still not confiscated 6 months after!

“While WFFT was given less than 3 hours to show all documents, a week later an illegal wildlife trader was allowed to keep all animals at his “safe-house” and was given 10 days to show his paperwork. Still now 6 months later he has not shown the documents, nor has any wildlife taken away! Orangutans, Lions, Tigers, Red Panda’s, and 300 more illegal wild animals!!”

We can only see double standards or a personal vendetta for these actions.

Currently a complaint by WFFT to the Parliamentary Committee on Law and Human Rights is being taken into consideration and two meetings have already taken place. The DNP director-general however has taken our request for a hearing as reason to again attack WFFT and the animals we care for. WFFT was raided on the 13th of February and produced all documents for the animals found under care of WFFT to police inspectors on the 14th of February, however DNP staff refused to look into the matter as they “already pressed charges and it was none of their concern any longer”…

DNP staff have said they will come back next week again to remove over 50 more animals from WFFT that have been rescued years ago and were registered accordingly, they want them not as confiscation but as donation. They say they are ready to take over these animals and care for them themselves, however they claim they have no vacant place to take in the illegal wildlife at Sraburi traders’ safe-house.

WFFT is of course willing to hand over rescued wildlife to the authorities for breeding and or release back to the wild as we have always done in the past, dozens of gibbons went to the DNP and the joint release center, fishing cats, leopard and leopards went for breeding to the Ratchaburi breeding center and several highly endangered birds were sent to the bird conservation center of the DNP in Huahin. We would like to know why so sudden so many animals need to go, and where they will be taken. Some of the animals have lived in groups or as couples for several years in very large enclosures and the chance of them getting into solitary confinement in small cages is very high. Animal welfare nor wildlife conservation is served this way!

-As an example; Currently the DNP cares for almost 1,200 monkeys and gibbons countrywide in 22 centers (see picture below) who will never be released back to the wild nor will they ever get a larger or better enclosure. While they are at WFFT they are registered and well taken care of. It should be a priority to first move illegally traded wild animals from raids at wildlife dealers to a better place and rescue the hundreds of animals that are still being kept at horrific places around the country!
(read part 2 in a few days)

DNP attacks on WFFT and Elephant Nature Park are payback?

Recent attacks on NGO’s in Thailand 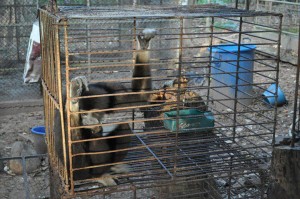 A Department of National Parks officer dumps wild animals at the WFFT wildlife rescue center close to midnight in 2004, some in bags. The officer did not leave any paperwork behind and a few days later Edwin Wiek of the WFFT was arrested for illegal possession of wildlife, clearly a set-up

2022 Highlights
Watch our 2022 Highlights. None of what we do is possible without you, our supporters. Please help us save more, do more and create a better world for wildlife.
BREAKING NEWS – ELEPHANT CONFISCATION
Two men arrested with a female elephant at the Myanmar-Thai border. The elephant is now in WFFT's care at our sanctuary.
November 2022 Highlights
Our team is as busy as ever taking care of orphaned, abused and injured wildlife and giving them a second chance in life. Watch our November 2022 highlights.
Copyright Wildlife Friends Foundation Thailand - All Rights Reserved - | - GDPR Privacy Our Policies
Back To Top
This website uses cookies to improve your experience. We'll assume you're ok with this, but you can opt-out if you wish. Accept Reject Our Policies
Privacy & Cookies Policy