WFFT was called to help out two fishing cats kept at a farmer’s home in Petchaburi province. The farmer, living on the edge of the Petchaburi mangrove forests of Laem Pak Bia, had trapped both fishing cats as they had entered his land on several occasions and had killed his free-roaming chickens. When the WFFT found the both cats they were in a horrible condition, both suffering from pneumonia and several skin infections. With the help of the abbot of a nearby temple the owner was after a long discussion willing to hand over the cats to WFFT for treatment. (the keeping of protected wildlife such as fishing cats is prohibited by Thai law, however this law is hardly enforced, help from religious leaders or local village heads can be a very helpful tool, benefitting the welfare of the animals in question).

After the both cats were found healthy after 5 months of treatment and quarantine they were both handed over to the Department of National parks, Wildlife and Plants, as they said to be running a release project for fishing cats (Prionailurus viverrinus) back to the wild. WFFT was of course more then happy to hand over these cats to go back where they belong, Thailand’s mangrove forests. 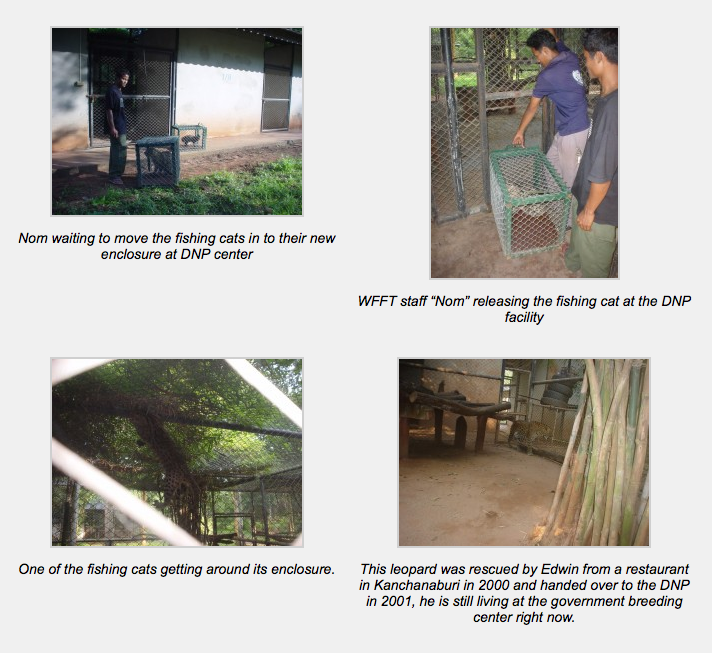 The cats were handed over to DNP officials at Kao Pratap chang wildlife breeding center in Ratchaburi, they are supposed to stay here for a few months before they will be returned to the wild. WFFT has not yet received word on the progress. Habitat loss and human-fishing cat conflict are a real threat to the survival of the species. Research in a nearby mangrove forests has suggested that at the current rate the cats might be extinct from Thailand within less then a decade.

We have just received bad news. A wild tiger that had attacked three people in…