Secondly we introduce you to Khai Liam. Khai Liam was initially brought to our attention by Phil, the snake man, at Koh Samui Snake Rescue. He has spent the last 5 years also tethered to a metal pipe on a very short chain. He was stolen from the wild as an infant, after being taken from his mother after she was killed, he was sold as a pet, and has spent most of his time in chains on the island of Koh Phangan. His captors realized how specialised the needs of these animals are and how dangerous they become at only a few years old. He has been fed predominantly on bananas and was very wary when offered mango on the way home to WFFT, but started eating soon after.

The IUCN Red List currently lists the stump-tailed macaque as Vulnerable (VU) due to population reductions in the past and a projected decline of at least 30% over the coming 30 years due primarily to hunting and continued rates of habitat loss. They are hunted and traded for food, sport and traditional “medicine,” and accidental mortality due to trapping occurs. There is also a trade for bones, meat for food and the live animals as pets. In Thailand, habitat loss is a major threat, and hunting is prevalent.

Upon arrival to WFFT Khai Liam started eating all the fresh fruit he was offered and seemed very relaxed in his new chain-free surrounding.

Luckily both monkeys have been handed over to WFFT to care for for. They are now in quarantine and we hope in the coming months they will be introduced to other conspecifics at the WFFT Rescue Centre, and will be housed in naturalistic enclosures, allowed freedom to move and express natural behaviours, with proper diets and care. Keep wildlife wild and not as pets. 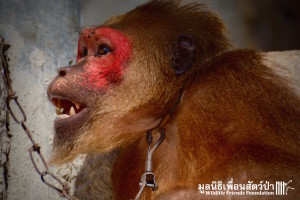 We will update you on both these special monkeys soon.

Thongs Ten Years in a Trash Filled Shack is Over…

Let us introduce you to Thong the highly endangered Northern white-cheeked gibbon, rescued by the…

Gibbons back on the forested island at WFFT