We will first introduce you to ‘Tuk’ the dusky langur. She was initially brought to our attention by the ladies at Buy No Rhino who were cycling though Thailand and found her at the side of a busy highway in Chumphon province. 8 years ago Tuk’s mother was shot dead, she was then sold on as a pet. She has spent most of her eight years on the earth, tethered by a short chain, attached to a metal pipe in a trash filled garden next to one of Thailand’s busiest highways. This is clearly not a suitable environment for any animal never mind an arboreal forest dwelling primate. She had been fed a diet of sausage and bread, many of you may know that langurs have highly specialized diets and care needs, we are very surprised she survived for years on this terrible diet. 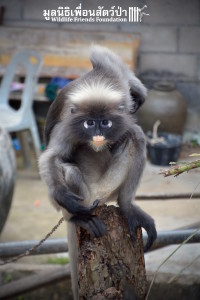 The IUCN Red List currently lists the dusky langur as Near Threatened (NT). Hunting for food and the pet trade are major threats, as is habitat loss and degradation due to expanding oil palm plantations, agriculture, and urbanization. Considering the extensive habitat loss that has taken place within the range of the species, there is reason to believe that this species is in decline.

Luckily both monkeys have been handed over to WFFT to care for for. They are now in quarantine and we hope in the coming months they will be introduced to other conspecifics at the WFFT Rescue Centre, and will be housed in naturalistic enclosures, allowed freedom to move and express natural behaviours, with proper diets and care. Keep wildlife wild and not as pets.

A few days ago we welcomed a new species to the WFFT Wildlife Rescue Centre,…

FINALLY GOT HIM! WFFT received a report from concerned Facebook members and the abbot of…

Have a look at Chin the disabled slow loris, who after daily physiotherapy sessions with…