Meet Jack the one-year-old long-tailed macaque (Macaca fascicularis) that arrived at WFFT yesterday. Along with his mother, Jack was taken from the wild to be sold and eaten as bush meat, his mother was was killed and eaten. A concerned local prevented the hunters from eating him and opted to keep him as a ‘pet’. He was chained to a tree in the direct sunlight in front of this person’s house with no access to drinking or proper diet. As Jack got a little older he started biting the children of his keeper luckily for him they contacted us to help.

The long-tailed macaque is listed as Least Concern (LC) by the IUCN Red list of Threatened Species, in view of its wide distribution, presumed large population, tolerance of a broad range of habitats, occurrence in a number of protected areas. Although it is under heavy hunting pressure for the pet trade, meat, sport and trophies, this is not considered a major threat to the species overall. Females are often taken into breeding facilities and males are exported internationally primarily for use in laboratory research. They are regularly persecuted as pests. Habitat loss is also a localised threat, but the species can persist in a variety of habitats and very adaptable.

Jack is settling into life at WFFT and is enjoying trying lots of new foods. After a period in quarantine Jack will be introduced into an open field here at WFFT with adults and some other young rescued macaques. Keep wildlife wild and not as pets. 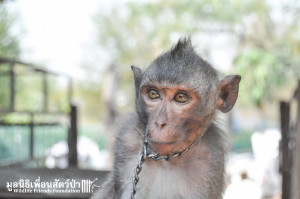 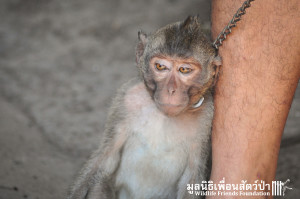 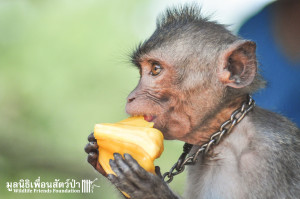 New arrivals: Lek and Jor – rescued coconut monkeys.
Two more monkeys rescued from the coconut industry. Never again will Jor and Lek have to be chained up and forced to work. Shortly after arriving at WFFT, both Jor and Lek had their metal collars removed and had a full health check.
Gibbon family gets a new island home
Tengkwa, and the rest of her white-handed gibbon family are thriving on their new, large forested island at WFFT. This is the next crucial step in their rehabilitation journey.
Rescued – Bengal Slow Loris
A few days ago a member of the public found a Bengal slow loris in their garden and contacted us for help. The team headed out to rescue the loris. After the initial health check it appears that the loris had sustained burns to his hind limbs and puncture wounds from a domestic dog or cat attack.
- Copyright Wildlife Friends Foundation Thailand - All Rights Reserved
Back To Top