The WFFT rescue team rescued a pig-tailed monkey 3 weeks ago and was informed by the person that handed over the monkey that she had bought it from a Russian couple on Phuket for 30,000 Baht. After a short investigation we found that this couple had more juvenile monkeys as photo-props and for sale. A complaint was send to the police. On Thursday the 14th of March the couple was found with 3 monkeys in their possession on the small island of Koh Kai Nok (Phangna province) of the coast of Phuket. WFFT is very happy to see swift action taken on this couple and applauds the confiscation, but at the same time wishes to see the same laws immediately enforced on the two dozen Thai people walking around with monkeys, lorises and gibbons on Bangla street in Patong, Phuket.

Here the news story from “The Phuket News”
Officers of the Natural Resources and Environment Department’s Crime Suppression Division visited the island after receiving information that the couple were offering tourists on the island the chance to be photographed with the monkeys. The officers were told that the couple – Andrey Olegovich Belov, 31, and Ekaterina Nikolaevna Denisovich, 22 – had been visiting the island daily for several weeks, charging tourists B200 to be photographed with two of the monkeys, or B300 with all three.

Although Koh Kai Nok is in Phang Nga Province, it was getting late by the time they had been arrested, so they were taken to Phuket City Police Station for initial processing. At first, the couple told police that the monkeys belonged to them, and Belov produced paperwork which he said confirmed this. However, officers discovered the paperwork consisted only of health records, and the names of an animal hospital in Chalong and of a microchip installation company.

The couple then told the police that the macaques belonged to a friend, Alexander Gabetz, but that he had gone back to Russia so they were looking after the animals for him. All three monkeys – named Anthony, Sam and Sonya – had microchips in their bodies and appeared to be in good health.

Police concluded that the couple had no government paperwork confirming their right to be in possession of a protected species. The macaques have therefore been seized and will be given into the care of Awat Nithikul, Senior Forest Academic at Khao Phra Taew Forest Preserve, before eventually being released into the wild. 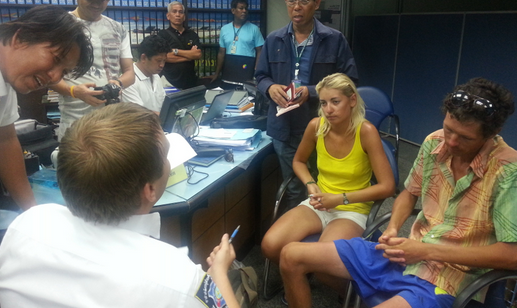 Belov and Denisovich are due to appear at the police station on Koh Yao Noi today, to be formally charged. They are expected to receive bail.

WFFT Note: All primates are protected species of wildlife in Thailand and can only be kept with people and/or zoos with a written permit by the Department of National Parks. The last permits for private citizen were issued in 2003, so if you encounter anyone with a young monkey, langur or gibbon you can be assured it is illegally obtained and/or kept.

The Next Big Step for Songkran