A sad story with a happy ending

KingKong is a gibbon. Well in Thailand anyway. Kingkong is a gibbon that was taken from the wild 8 years ago when he was still a little baby with his mother. A villager in Bangsaphan, Prachuapkhirikhan who is living inside a National park area went hunting inside the jungle and shot Kingkong’s mother only seeing she had a baby once she fell to the ground.

We can only guess what happened to the dead mother after this, but the hunter kept the baby gibbon at home as a pet over the last 7 years, caged up in an enclosure you wouldn’t even put a dog for a single night. 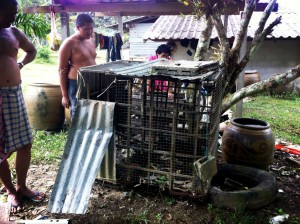 If it wasn’t for the great people of the Thailand Hornbill Research Project nearby, we might have never known about KingKong’s fate. These people contacted us and asked us to reduce KingKong, after asking the owner for mercy and allow him to go.

We know it sound horrible that people are allowed to live and encroach into National Park areas and then even get away with poaching and on top of that keeping protected wildlife as pets for years to go… We too do not understand how this could happen again and again, but right now we do see KingKong in his much larger quarantine enclosure, playing, running and swinging around for the first time in many years. Soon he will move to a very large open enclosure and meet more gibbons just like him. 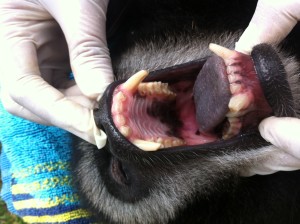 It is the last day of this year 2012, a year that has been horrible for the animals and people at WFFT, but we would like to wish KingKong a happy new year 2013! Welcome to WFFT KingKong, you are safe now!!! 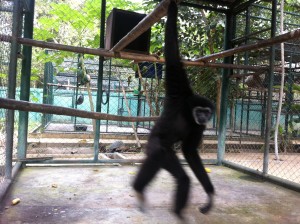 For more on the Hornbill Project: http://www.thaihornbill.org

Our Enrichment and Construction Teams have been hard at work creating P5’s Primate Park! These…