Finally JUSTICE after 2 years of fighting!

The 27th of February 2014 is an important day for wildlife conservation and animal welfare in Thailand! Today the court of appeals ruled in favor of Edwin Wiek, Jansaeng Sangnanork and the Wildlife Friends Foundation Thailand (WFFT) after they were accused of illegal wildlife possession and lots of other crimes on a brutal raid that lasted almost 10 days that started on february 13th, 2012. 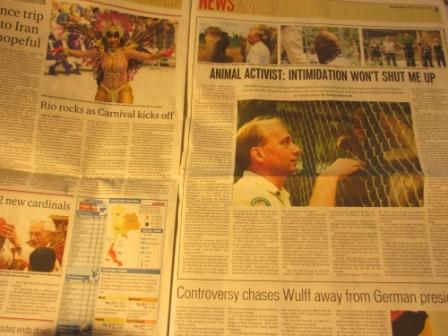 The court of appeal ruled the complete case agains the three defendants dismissed, as evidence provided in court clearly showed that the WFFT had always registered all animals correctly and that DNP wildlife officials at region office 3 neglected their duty in producing their follow-up paperwork, resulting in WFFT and other defendants being charged for illegal possession of protected species.

Directly after the court ruling the three defendants were told to get the earlier in 2013 paid fine (90,000 baht or $ 3,000) back from court, and to consider a counter-sue for losses and tarnished reputation. We were told we should receive all confiscated animals back, but will have to go through the proper procedures, while right now not having an idea yet how long this might take.

For a complete translation of the court verdict into English we might have to wait a short while, but we are sure now: Helping and rescuing wildlife is NOT A CRIME in Thailand any longer!

WFFT will in the coming weeks make a decision on further action, but will first try to set up a meeting with the authorities to find a way to better cooperate in the future for the benefit of wildlife conservation and animal welfare. 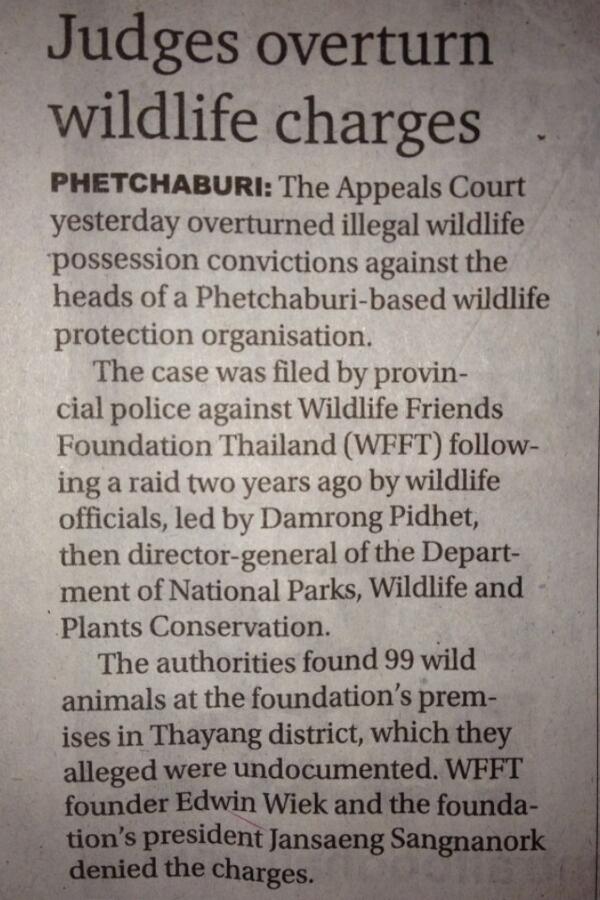 The history:
On January 24th, 2012 Thai newspaper publicised an open letter of Edwin Wiek, founder of the WFFT, where Edwin talked about the poaching, killing and trade of elephants for the tourism trade in Thailand. Edwin not only mentioned how the illegal traders and poacher worked but also directly accused some of these people that were working for a government department.

(here one link to this article)
http://www.nationmultimedia.com/opinion/Thai-elephants-are-being-killed-for-tourist-dollar-30174341.html

Within a few days after this story was published 5 park officials were called in by police for questioning and run off for several months, they were finally brought to justice half a year later and were found guilty of illegal wildlife possession and trade in May 2013.

In the meantime however, Mr Damrong Pidhet, director-general of the Department of National Parks at that time, ordered a raid by 150 armed officials to the wildlife rescue and elephant sanctuary of the WFFT, under the excuse of an anonymous tip-off that there were 15 illegally hunted wild baby elephants at the WFFT center. This way he secured a court warrant to search and occupy the premises of WFFT for almost 10 days, accompanied by army special forces, homeland volunteers, police and hired thugs who would intimidate staff and volunteers during that time.

A lot of fake charges were made up to shame the WFFT and Edwin Wiek in particular, so the local and International media would no longer that his accusations serious. Wiek was accused of forest encroachment, embezzlement, illegally running a wildlife clinic, illegal wildlife trade, laundering of wild elephants, theft and environmental pollution, just to sum up a few…

DNP officials of region 3 raided the center and started to round up animals without reason on the 15 of February until the 23rd, injuring many and killing some, as they brought in local people without any expertise in handling wildlife. It is believed that the main aim was at that time to get Edwin Wiek, founder of WFFT to act up against some officials to have him removed from the country.

Wiek’s wife Janseang Sangnanork, or Noi, was arrested and thrown in jail, without right to bail to put to put further pressure on Wiek during the first day of the raids. Evidence handed over of ownership of some animals, and documents registering others was ignored from day 1 onwards. Within hours charges were pressed against Edwin Wiek, Noi and the foundation for all above mentioned crimes.

Requests for a fair investigation and trial were dismissed by local police , the DNP and the prosecutors office for almost 8 months, until finally a parliamentary committee was set up to investigate the whole legal case, with the back up of 62,000 signatures from people worldwide, and 12 members of parliament and legal experts. The prosecutor however decided to push the court dates forward, and refused to accept evidence to strengthen our case.

The provincial court ruled at first not in favor of the three defendants, stating that government officials have no gain from any case such as ours, and therefor believing them on their word and not taking any evidence of WFFT, Noi or Edwin into consideration. All three were found “guilty” of illegal wildlife possession and were given a suspended jailterm of 2 years and a fine of 90,000 baht, the highest fine ver for such an offense. All went into appeal, stating the investigation was unfair and that all evidence had been ignored from the start by all agencies involved.

(After three months the heat was up)
http://www.nationmultimedia.com/opinion/Furore-intensifies-over-elephant-trade-in-Thailand-30177691.html

More anger on lack of protection for wildlife

Did you know that the WFFT Wildlife Hospital treats over 1000 animals every year? Many of these animals are rehabilitated and released back to the wild.