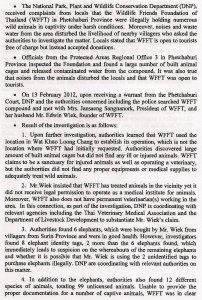 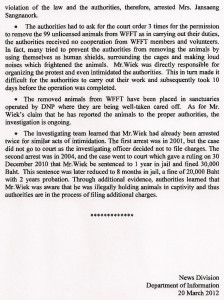 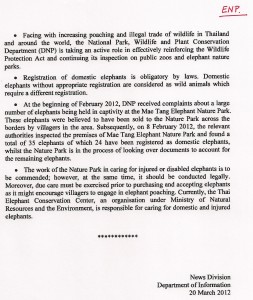 After one month of sending letters and questions raised by supporters of Wildlife Friends Foundation Thailand (WFFT) and Elephant Nature Park (ENP) to Thai embassies around the world, with numerous stories on local television in Thailand and on international TV the Department of National Parks has come out with an official reply to concerned citizen, the media and other NGO’s. The WFFT hereby would like to take the opportunity to respond to the numerous allegations and untruths mentioned;

The DNP starts their official reply stating that complaints were send to their department that we were holding numerous illegal wild animals “under harsh conditions”. Furthermore they claimed that WFFT polluted waterways and produced noise disturbance. They further stated that we were open to tourists free of charge but accepted donation.

REPLY: There are indeed numerous animals at WFFT, but they are not in a bad living condition at all, to the contrary, the animals are living in large enclosures with clean drinking water and a well-balanced food supply through the day. The WFFT wildlife rescue center is considered the best facility in Thailand for rehabilitation of wildlife by Thai and International NGO’s involved in wildlife conservation, an example of international standards implemented. The animals were not held illegally, as all have been registered with the local DNP office in Petchaburi over the last 7 years. Evidence is provided to the investigator on the 27th of February and we await a reply from the DNP for almost 4 weeks now.
WFFT does not pollute any waterways; we hereby challenge this allegation asking the DNP to proof this with evidence. WFFT runs a compost project as a natural fertilizer for re-forestation where all dung, faeces and food leftovers are being recycled. The only noise that comes out of WFFT is the sound of singing gibbons, something that we have had here for 11 years. The closest people living to the gibbons are the WFFT volunteers and the monks of the temple who have never complained.
The wildlife rescue center is open to all visitors and has been over the last 11 years, it is open so people can learn more about the problems wild animals face and to make sure people can witness our work first hand. As we employ over 30 Thai staff members and feed over 400 animals every day, donations are accepted; can the DNP give me the name of one foundation or society that does NOT accept donations? The DNP themselves ask for donations for animal food at their own facilities, while they receive taxpayers’ money, and a recent TV report even shows that due to lack of money/funds a Ratchaburi government breeding center breeds wild animals to sell in exchange for money to buy food.

In reply to the results of the investigation:
1. WFFT is registered right here at Kao look chang, but had its head-office until 2005 in another district as the foundation had to be registered on land owned by the WFFT. Once we received permission from the provincial government to move our office to the current location we did so. Main reason for this move was to save expenses. We have received official permission to move, and have the written evidence. Once a location somewhere gets too small, inconvenient or expensive people move, so do companies or organizations.
At the wildlife rescue center we have treated hundreds of animals, and as we have a good team, a fully equipped treatment room and surgical theatre we pride ourselves in this with a very high percentage of animals surviving. On the day of the raid only 17 animals were under treatment for skin diseases, infections and injury from electrical shocks and road accidents.
2. WFFT has had (Thai) veterinarians working on site for the last couple of years, and evidence in the form of pictures and written treatment sheets have been shown to the DNP officials. We are currently engaged in clearing this matter with the relevant authorities, not the DNP, as it is not their responsibility.
3. Mr Wiek did not buy any elephants. The WFFT has taken in elephants for treatment over the last few years and in some cases generous sponsors have provided funds to effectively retire these elephants from working in the begging or tourist industry. All elephant rescued have been taken in legally and are absolutely captive elephants. The copies of 2 registration papers of 2 deceased elephants were shown to the authorities as their corpses have been buried on site. The ministry of interior has been informed about the death of these elephants as required by law. Actually both of the elephants were not our property, so the actual person(s) that needed to report the deaths is not we. The DNP should know their laws before accusing us of illegal elephant trade.
4. For 103 animals that were taken we do have the documents, as a matter of fact 4 animals have been returned now, but the biggest amount is still being kept at the DNP breeding centers. Some of the animals taken were born at WFFT over 6 years ago and were registered in 2006. The officials of the DNP were never interested to see the evidence and have given us only 2 and half hours to provide the papers for over 400 animals.
5. The authorities did take 10 days to confiscate the animals, due to the fact that they had no experience or proper equipment to get the job done. At all times staff and volunteers wanted to witness the capture and document it with photo and video as it was done in an unprofessional and torturous way probably to get our staff to get emotionally provoked. At no time did anyone of the WFFT intimidate any of the authorities, as a matter of fact that is quite hard to do with most of the people being young women, against heavily armed rangers and police officers!
6. The animals that were taken away have been taken to undisclosed locations where staff, volunteers or even the media has been refused entrance. News has now surfaced that the conditions these animals are being cared for are sub-standard and that none of the government facilities have an onsite hospital, treatment center or surgery facility at all. Furthermore it has been confirmed that one 17-year-old pregnant elephant that was confiscated in good health has died mysteriously on the night of 19-20 March at one of the government facilities. For the lives of at least 2 gibbons is feared at this moment, just as for the wellbeing of all other confiscated wild animals of the WFFT and 20 more elephants taken from elsewhere. Besides this it is also a mystery why 300 wild animals found at an illegal wildlife traders’ hide-out in Sraburi province, including CITES protected orangutans, red pandas, tigers and lions have not been taken by the DNP, a clear sign of double standards.
7. Mr Wiek was indeed arrested in 2001 for illegal possession of wild animals and court found him not guilty as the origin of all animals was confirmed, exactly like the expected outcome of the current pending case. The second case in 2004 was a set up by an official that delivered some wild animals in the middle of the night in rice-bags and rusted birdcages a few days before the raid saying he felt sorry for the animals that he removed from a few places. Pictures of this event are still with us. As there was no paperwork delivered with the late night delivery court ruled that for those 12 animals, we had them in illegal possession and advised to make sure papers should be filed with every rescue case we made in the future, which we have done from that moment on.

We would like to add that the whole explanation of the DNP here seems to be focused on the character killing of Mr Wiek and the WFFT reputation instead of taking in to any consideration the wellbeing of wildlife, the fight against the real wildlife poachers, smugglers and dealers. The numerous accusations all are found less and in some cases slanderous, to say for the least.
To state or even suggest that WFFT has been involved with illegal possession or trade of wildlife, or that WFFT would be even considering purchasing illegal elephants is a blunt insult to 11 years of hard work by WFFT management, Thai staff, Thai supporters and volunteers from all over the world. The WFFT has over the last 11 years worked hard to set up a world-class rescue center of international standard, and has during this period always interacted and communicated with the authorities. Some of the officials in the Petchaburi office are now trying to cover up the fact that they did not act on our paperwork and neglected their duty in following up, which now creates a legal problem for our foundation and in particular our president. For this we are considering legal action against the officials responsible and we are trusting on the Thai juridical system to confirm their wrongdoing.

The WFFT built and financed Thailand’s only gibbon release facility in the jungle of Lum Nam Pai, Maehongson up to the standard of the IUCN, in cooperation with Mahidol University and the DNP. WFFT has published and reported numerous illegal wildlife cases to the DNP assisting them with wildlife law enforcement, including a worldwide covered smuggling case of over 100 baby orangutans, where WFFT provided funds and logistics for DNA checks and a very expensive repatriation back to Borneo, Indonesia amongst one of the most news-making cases.

For the above mentioned it is with great disappointment to see that we are now being unfairly attacked and being portrayed as criminals by the DNP while we have always provided help, advise and logistics to the department.

We as the WFFT have no personal grudge against the DNP as a department, its officials or any person in particular. We do however feel we are being attacked in an unfair and unethical way by some individuals and question the real objectives of these attacks against WFFT and ENP. It does cross our mind at times that law enforcement is not the primary objective here.

In reply to allegations on ENP by the DNP

Again mentioning a complaint without having an actual real complaint in hand, this time it was said someone made a complaint that 70 wild elephants were kept at Elephant Nature park (ENP), but the complaint was made by phone only (…), since when are anonymous complaints taken serious?

It is mentioned in the press release of the DNP through the department of information that ENP purchased elephants from across the border, which would be in clear defiance of the CITES regulations and laws, if the DNP is willing to state this rather slanderous accusation we assume they have evidence of this?

The Thai Elephant Conservation Center is indeed taking care of some elephants, but it needs to be noted that with the latest confiscations of 21 elephants from various places there are serious concerns about the wellbeing of these elephants, especially as one 17-year-old female and pregnant elephant confiscated in good health died under suspicious circumstances within a few weeks of moving it away by DNP officials.

Reading the official letter makes us almost feel as if charities such as ENP are being blamed being the origin of elephant poaching and trade, while they actually care for those elephants that need help and treatment that not many others are willing to provide.

It is always such a pleasure for us to receive school groups. Indeed, one of…