Thailand – 20th April 2016 – The infamous Tiger Temple in Kanchanaburi, Thailand has been granted an official zoo permit from the Thai authorities, signed by the director-general of the Department of National Parks, Wildlife and Plant Conservation (DNP) this week. 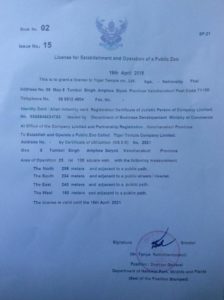 We at the Wildlife Friends Foundation Thailand (WFFT) are shocked and disgusted by this latest development of an ongoing sickening drama that has continued for so many years.

Early February 2015, 38 hornbills of various species, all protected under Thai law, were kept in pairs. All of these birds were illegally kept and confiscated from the temple by authorities. The temple had no permits to keep these animals. Two Asiatic golden jackals (Canis aureus) and two Malayan porcupines (Hystrix brachyura) were also found, but disappeared overnight after they were officially seized by officials. Six Asiatic black bears (Ursus thibetanus) were found in a pit, without any documents of origin or ownership either. Two African Lions (Panthera leo) were found hidden behind the temple in a dark cement block, needless to say, the temple again did not have the legal permits allowing them to house these endangered animals.

The raids in February 2015 were triggered by allegations of the Tiger Temple’s chief-veterinarian, that were made public, about the illegal killing and disappearance of several tigers from the temple. These tigers were removed from the temple over a period of time, allegedly to wildlife traders within and outside Thailand, highlighting both the domestic and international illegal wildlife trade. Each of the tigers that disappeared were older males that were deemed less useful to the temple, adult females produce numerous cute cuddly cubs, which further decreases the value of adult males for the use and exploitation in tourism at the temple.

Butchered male tigers have a much higher value in the illegal wildlife trade for traditional Chinese medicine, it is believed that their penises enhance male virility. Three of these tigers went missing three months earlier and although known to staff and management of the temple, it was never reported to authorities, which is food for thought.

Thailand’s wildlife preservation act stipulates very clearly that people involved in the illegal wildlife trade can not obtain a zoo license, so how is it possible that the Tiger Temple has granted one? The explanation might be funny, if it wasn’t so absurd, so unbelievable. The authorities say there is currently a lack of evidence to file charges against the abbot and/or management of the tiger temple. In the meantime, one of the staff of the temple, a man who cleans cages (homo scapegoatus), has been accused of all the wrongdoing at the temple. It is now claimed that he all on his own, received all the protected wild animals as donations from “caring” people, taking them in one by one over the last few years as “rescued wild animals”, without anyone else being aware of this. Basically the abbot, other monks and management of the temple were not aware of the existence of any of the over 80 rare and protected animals such as the hornbills, jackals and bears at the temple. The massive 10-meter-high cage with hornbills at the entrance of the temple was probably never noticed by any of them. The six Asiatic black bears that were all immensely overweight were neither seen or heard by them either. The collection of hornbills was impressive, all species of hornbills seen in the wild in Thailand were there and all were conveniently paired, something that does not happen when they are rescued. Even if these hornbills were really ‘rescued’, why did the temple not register them to show intend? Is it because they think they are above the law? Well to be honest it seems they are above the law. The temple has traded wildlife illegally for years, they were found to have illegally obtained animals that were in their possession and they even obstructed the law on several occasions, including the disappearance of seized wild animals. They have exchanged protected tigers from the temple with lions from Laos PDR, engaging in illegal cross border trade, which is against the international treaty of CITES (Convention on International Trade in Endangered Species) of which Thailand is a party.

Instead of being taken to court and receiving a well warranted penalty for all the crimes committed they now are rewarded with a zoo license, so they can further continue the uncontrolled breeding of more and more tigers. The temple can now obtain lots of more wildlife, through legally trading and purchasing many more endangered species, further increasing the abusive practices of this, what seems to us, like an unstoppable hell hole for animals.

Sadly, we can only conclude that in 2016 wildlife crime pays off too well in Thailand, for only the criminals that is.

Last but not least we also would like to ask the Religion Affairs Department under the Ministry of Culture if commercialisation, the opening of unethical businesses in temples, will be the new rule from now on instead of practicing the teachings of Buddha.