Repatriation of illegal orangutans to go ahead under controversial circumstances

Bangkok, 20 November 2006 – It is only one more day to go before the orangutans confiscated from a zoo in Bangkok are finally to be send back home. After waiting over a thousand days or three years since the actual confiscation the complete operation is still a controversial one.

The Department of National Parks, wildlife and Plants (DNP) agreed to return 48 out of 53 confiscated orangutans. It was said that 5 were “donated” to the Chiangmai Night safari, a zoo similar to the place they were initially rescued from. One of the chief-advisers of the night safari park is the owner of the Bangkok based zoo that was ultimately never charged with the illegal possession of the 53 apes. Heavy protests from Indonesian based NGO’s have followed upon this decision. Thai Forestry Police officers are surprised with this decision and have asked why not all are returned. A team of veterinarians send by the Indonesian government to accommodate the repatriation of the apes arrived on Saturday in Thailand but was not able to check on the health of the apes, therefore creating a potential dangerous situation, as there is no proof the animals are healthy enough to travel the exhausting 24 hour journey.

Wildlife Friends Foundation in Thailand (WFFT). Besides this the cages have been modified by the DNP staff, removing stickers and markings on all enclosures as they feel no NGO’s or other government agencies should get any credit for the repatriation. Stickers of the

Indonesians Forestry Department, BOSF, WFFT as well as the Thai Forestry Police who were instrumental in the legal case were removed. The on-purpose build metal and aluminum moving cages which have a value of over 6000,000 baht, are property of the BOSF and have been provided free of charge to accommodate the repatriation as the DNP has said they could not supply such moving enclosures.

The Indonesian government in cooperation with the BOSF will late on Tuesday night load the apes into a specially chartered Military aircraft owned by the Indonesian Navy. The plane will take off at 03:30 hours sending back the apes to Borneo with a short stop-over in Jakarta where the Indonesian First Lady will welcome the apes back home. 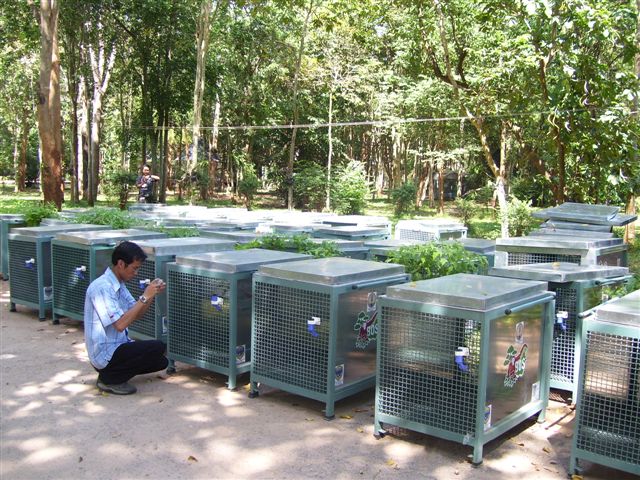 Cages before the stickers were removed at Kao PrathapChang

14:00 Start with immobilization of the larger apes. Although the DNP told us all animals are in quarantine dozens of reporters could play with, touch and feed the apes before repatriation (photo taken on 20-11-06)

LATEST NEWS: 5 orangutans from Night safari will be returned!

Not to go with the 48 orangutans but on a later date. Update soon.

To rescue and unchain “Johnny” !

On the way to a New Home – Maggie and Chico