Canoe is a chimpanzee that has been living in a small cage in the middle of Bangkok for about 24 years. We would like to rescue Canoe and give him another chance in life, but unfortunately Thai law does not protect wild animals that are not locally found in the wild, a chimpanzee is found in a few African nations only. We also lack animal welfare laws in Thailand, so no conservation laws, nor animal welfare laws make it possible to force the owners to give up Canoe and move him to a better life. 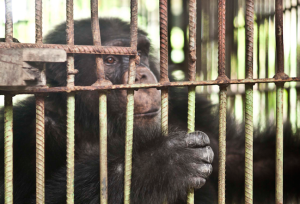 For more than 2 years Edwin has been talking to the owners, and visited Canoe several times. Unfortunately there is no more hope in sight so we are now openly asking the owners to improve Canoe’s life or ask the authorities to do so. Besides the fact that Canoe deserves better than this we are also very concerned about the safety of people nearby, as the cage is getting old and rusty and an adult male chimp could do serious damage to people, especially children that play nearby.

We would not have published the photos and this story if we didn’t feel this was a last resort. Solitary confinement of a few square meters with nothing to play with is not even given to the biggest criminals amongst us. We urge the Director-geneal of the DNP to confiscate Canoe and provide him with a better home.

A short video of his “home” now

If you agree this is no place for an chimpanzee to be please sign the petition!

Some Old Fogies get a Second Chance

WFFT rescues and rehabilitates 100’s of primates each year, many of them are able to…