The wildlife center rescue team had been called sometime ago to rescue a group of gibbons and a langur from a failed resort development outside of Nakhon Ratchasima (Khorat) province north east of Bangkok. With the coming of the recent rain and movement of several pairs of gibbons to the islands, we finally had room to care for these animals properly at the center.

On Wednesday the 20th Nov, a group of seven people from the center, including Edwin, the veterinarian, vet tech and animal keepers, headed off to rescue the neglected animals. Once at the location, it was obvious the animals needed to be moved. Some of the gibbons were housed in reasonable sized enclosures but without any kind of enrichments, and all enclosures were littered with piles of faeces, rotting food and debris. Some of the gibbons were actually overweight, astonishing given the level of care they were provided, but most likely that someone had been overfeeding them due to feeling guilty about their conditions.

With no enrichments, the animals probably had no interest in anything other than eating. A solitary Langur, ‘Alfie’ completed the group of 11 animals. Alfie was obviously suffering from a skin complaint on her head and thorax, and only had dirt-caked stuffed toys for company, with which she was displaying stereotypic stress behavior. All animals were sedated for capture, examined thoroughly and medicated (deworming and vitamin supplements) before transporting back to the center. Though the trip was a long one, the animals all coped well with the change and easily went into their new homes.

It has taken a few days for all animals to settle in but finally they all appear to be eating well and getting used to their new environment. Alfie has made two new friends with our resident langurs and no longer needs her dolls, while all the other gibbons have been successfully paired into male/female groups. 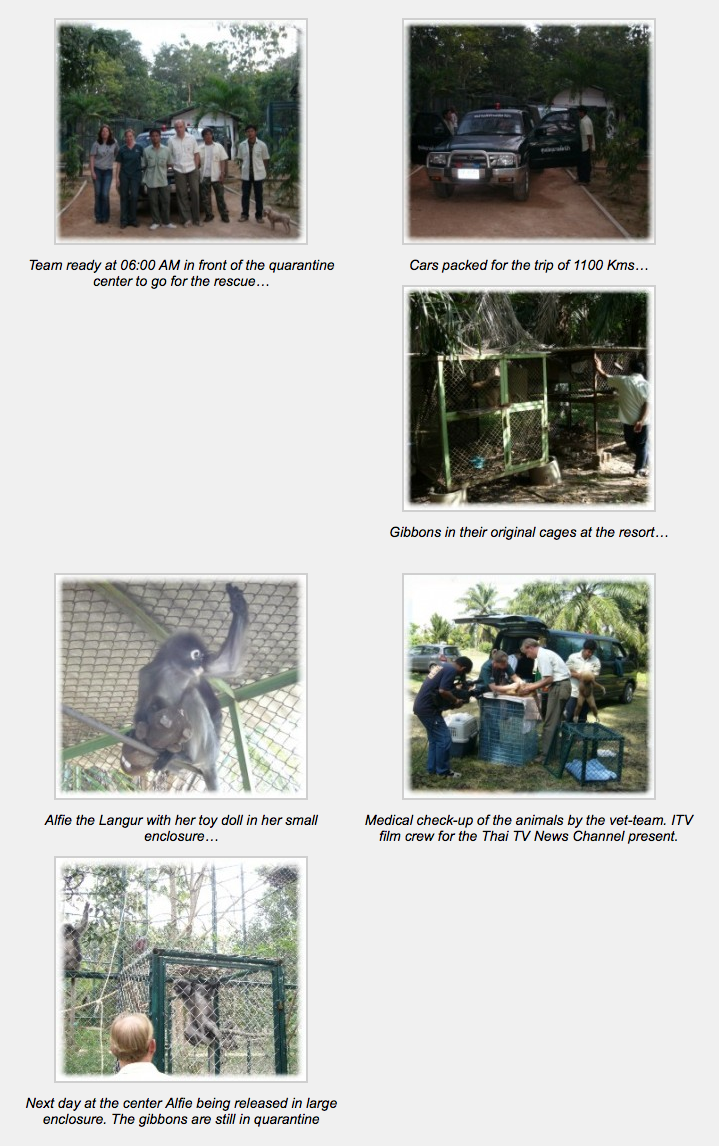 Here is some Great News – Asanee & Wasan move to a new home!!!

After six years of waiting they are finally on the way home!!!

Edwin and the team are currently flying to Jakarta, Indonesia to return 14 orangutans back…