Another victim of encroachment and ignorance

A wild elephant of about 7-8 years of age in Phetchaburi’s Kaeng Krachan National Park was fatally electrocuted by a 220-voltage electric fence yesterday set up by an oil palm plantation’s owner. The poor elephant was found early in the morning of June 13th.

This incident prompted Petchburi’s governor Monthien Thongnit to inspect the scene. He criticised the type of fencing used, saying that it was unnecessary. Petchaburi province has campaigned for elephant conservation and substantial funding has been channelled into taking care of the park’s elephants and reducing conflicts between the pachyderms and farmers. Following the 9 am report of the electrocution at Ban Pa Ka Yor in Tambon Pa Teng of Kaeng Krachan district, police rushed to the scene and found the carcass of a male elephant entangled in the fence. The electric fence – erected to prevent elephants to eating the palms in the 25-rai plantation – belonged to Nareunart Ketrat, 50, who admitted to setting up the fence.

Previously, two cows belonging to a neighbour were also reportedly electrocuted near the same spot. The fence had no special equipment installed for safe electrical fencing but was instead directly connected to the normal 220 volts electrical grid, deadly for animals and people if touched. 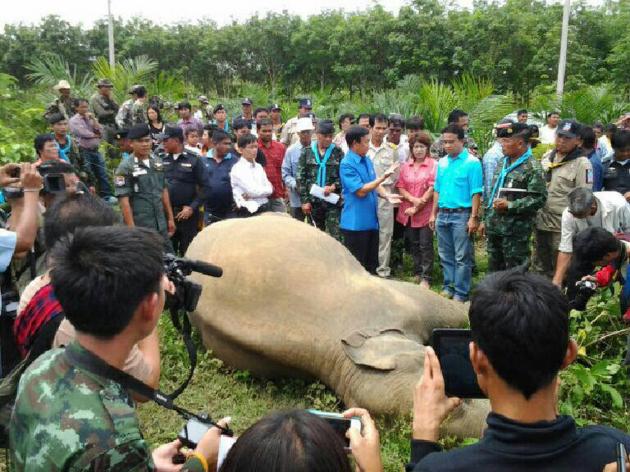 The fence is within the Pa Yang Nam Klad Neu-Tai Forest Reserve, which farmers repeatedly encroached upon. However, legal action against encroachment in the area has not been pursued pending the “right-over-land” identification in accordance with a Cabinet resolution. This investigation and ruling has taken so many years now and actually has attracted even more people encroaching as they are using this as a legal loophole. Over the last 10-12 years we have seen farmers moving up the hills and in to the forest by 20-40 meters a year, slowly and bit-by-bit occupying trails that have been used by elephants for centuries for foraging and movement to water sources.

Despite the resolution prohibiting encroachers from re-selling the land, Nareunart told police that he had recently bought the plot to grow oil palm – a story that was confirmed by a village headman, who acted as a witness to the Bt1.5 million land purchase. Nareunart was initially charged with violations of the Wildlife Protection Act 1992 as well as encroaching on the forest reserve.

WFFT will follow up on the legal case as usual to find out if the land owner indeed gets prosecuted on all charges. We will further (again) pressure the government and authorities to enforce anti-encroachment and conservation laws to the maximum.

We really need your support to raise funds for our new Elephants Wild Enclosure. Please…