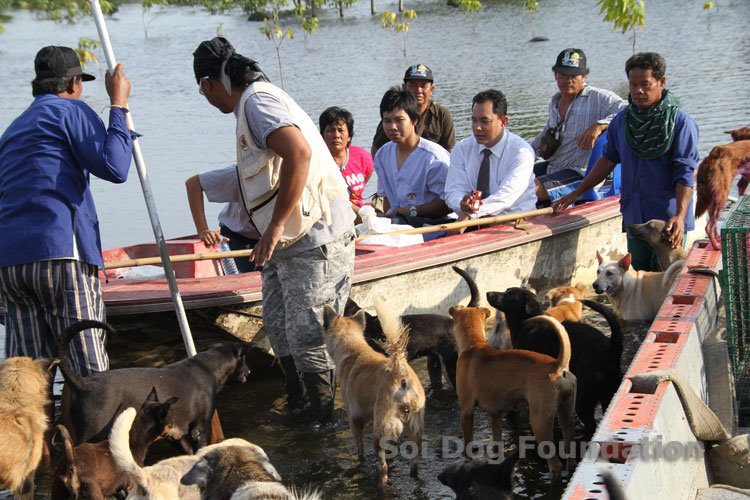 Around 4pm, a vet from the Livestock department arrived to assess some of the more critically ill dogs. His main concern was a distemper outbreak, the disease we all fear the most & have been watching for. Several dogs were possible suspects, so we took them back to Bangkok for testing. Thankfully none have tested positive. Blood parasaite disease, heartworm & chest infections are prevelant amongst the dogs we removed. One dog was also removed for a form of Venereal Disease & will require chemotherapy. Another dog has terrible mange & has been painted with a form of Jensen Violet by thai’s which is a Thai remedy. This dog will now receive the appropriate treatment by veterinary surgeons.

We left Dog Island with 8 dogs in our small boat. Two critically ill, five requiring urgent attention. Two of these were little black dogs who appeared in previous videos. One other lucky dog (who appears totally healthy) was allowed to leave the island (after permission from the Thai lady who cares for this dog). Our recent video of this dog prompted an adoption in the UK, so this dog (now called “Oreo”) will be flown to Phuket shortly where he’ll spend 3 months before flying to his new home in England.

It is vitally important to understand the magnitude of this disaster. Relief work will be going on for months! You can help support the relief work through a one time or monthly donation to day. If you are in a position to help please visit…http://www.soidog.org/en/flood-relief/

Update : Miracle for Severely Injured Dog
It's been 3 weeks since the miracle dog "Hope" was admitted to the WFFT Wildlife Hospital, her injuries have wonderfully improved!!
Rescued: Miracle for Severely Injured Dog
“Hope” living her regular day as a street dog, searching for food from trash and looking for a safe place to sleep every single night. All of a sudden the tight collar that was placed on her neck started to cause excruciating pain.
We Need A home!!
We need a home!! We have had numerous kittens and puppies dumped in the road outside our gates. Currently, they are being quarantined in our hospital. We can provide you with free vaccinations and de-sexing.
- Copyright Wildlife Friends Foundation Thailand - All Rights Reserved
Back To Top