On Monday the 10th of June 2013 police again raided a house of a known and earlier arrested wildlife trader on the outskirts of Bangkok. Just like a year ago in Sraburi province, police found about 300 protected and endangered wild animals, such as lions, baboons, other monkeys, lorises, turtles, civets, meerkats and lots of other exotic wildlife.

Police invited the Department of National Parks and Wildlife (DNP) on their raid to this house in Khlong Sam Wa area of Bangkok, expecting them to confiscate and remove all wildlife from the illegal traders “Safe house”, but things did not turn out this way, just as it didn’t a year ago in Sraburi with the other previously known wildlife trader. The DNP only removed one leopard cat, a juvenile hornbill and a few turtles. Why? 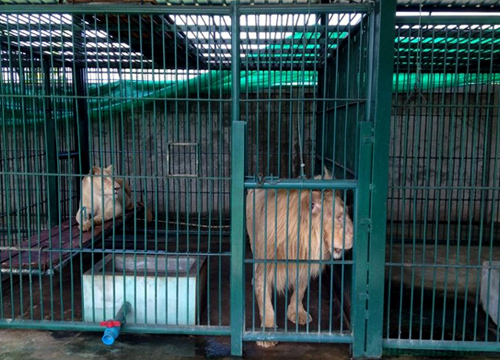 Some the found lions

Thailand is a signatory of the Convention on International Trade of Endangered Species (CITES) and actually hosted the last conference of the parties a few months ago in Bangkok. Thailand however fails to protect wildlife species from abroad, the “foreign” wildlife species, as they like to call it. It basically means that endangered wild animals found without paperwork recently such as lions, chimpanzees, orangutans, red pandas and so on, do not find any protection under Thailand’s local laws and enforcement.

Just like with the raided wildlife safe house in Sraburi last year we expect to see no further legal action or a push for prosecution in the case of Montri, the owner of the raided house in Sam Wa. Montri was said to be arrested yesterday, however police have not arrested him yet, nor have charges been laid against him till now, as he is given at least a week time to produce his evidence and paperwork. Montri will actually only have to hand over some papers for the found Thai wildlife species, which were only a handful. As Montri is a good friend of an official who handed out permits in 2003 during the wildlife amnesty, we are sure he can produce sufficient paperwork for these few animals. The other 300 wild animals that are not of Thai origin will remain probably in his possession or be sold on quickly to get them out of sight, just as happened with all “confiscated” wildlife in the Sraburi raid last year. It is of course an embarrassment to authorities to see such a large number of illegally traded wild animals in one home near Bangkok, but as the animals were not caught being traded over the border red-handed there is little that can be done without any political will and urgent needed law changes.

WFFT is drafting the urgently needed law changes for a parliamentary committee on law to be taken in to consideration, this includes a proposal to INCLUDE wild animals to animal welfare laws, which is currently opposed by DNP and the Zoo associations of Thailand. We sympathize with the DNP for not wanting to take the burden of the care of so many foreign wild animals that might have little to no conservation value to Thailand, however it must be said that without confiscation, heavy fines and jail sentences the illegal wildlife trade can’t be stopped, the profits are high while the current penalties won’t scare anyone off, to the contrary wildlife trade is more than lucrative right now.

Thailand should include all endangered wildlife, local and foreign, under the same protection laws, as stipulated by the CITES agreement signed over 20 years ago, thereby honoring an international agreement to protect the biodiversity of our world.

—On a personal note I would like to stress that it extremely stressful for us to see that these wildlife traders get up to a week or more to produce paperwork and no animals are moved out at all, while our foundation was raided last year with only less then 3 hours time given to get paperwork presented, and the DNP started to take animals heavy-handed within 24 hours. Luckely the head of the DNP of that time is now retired and almost forgotten, but the double standard has been set.