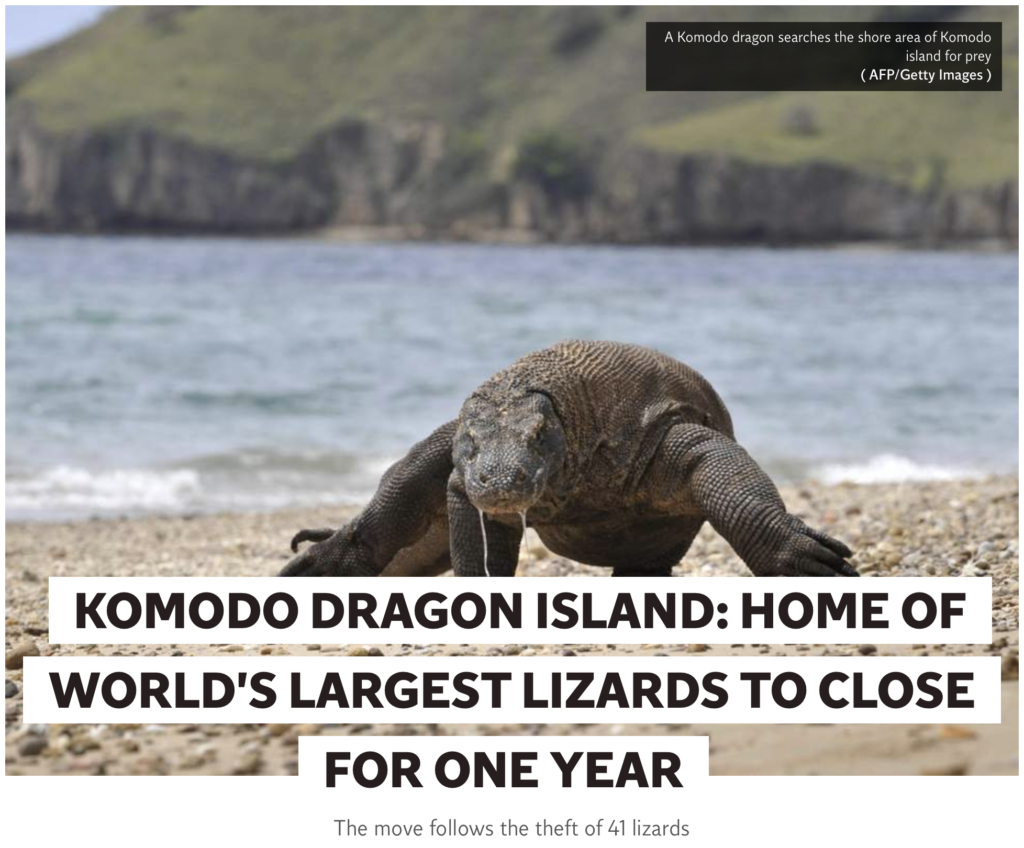 The endangered Komodo dragon is found only on the island of Komodo and a few surrounding islands in Indonesia. Being the biggest of all Varanus species or monitors (aka dragons) it is highly sought after by zoos, private collectors and reptile enthusiasts worldwide. Because its range is so small it is easily spotted and therefor there is higher probability of it being poached by criminals.
Reading earlier today this disturbing article of the Independent we reminded ourselves that we lately found Komodo dragons (Varanus komodoensis) in Thailand, in an obscure private facility, where we also found a critically endangered Chinese Giant Salamanders (Andrias davidianus), the worlds largest amphibian. None of the mentioned species were ever legally imported in to Thailand according to CITES (Convention on International Trade of Endangered Species), making it very clear to us these were illegally imported. We are further investigating similar cases, and have handed over evidence to authorities, unfortunately without any action being taken as of yet.

More info on the Komodo dragon:
The Komodo dragon (Varanus komodoensis), also known as the Komodo monitor, is a species of lizard found in the Indonesian islands of Komodo, Rinca, Flores, and Gili Motang. A member of the monitor lizard family Varanidae, it is the largest living species of lizard, growing to a maximum length of 3 metres (10 ft) in rare cases and weighing up to approximately 70 kilograms (150 lb).
Their unusually large size has been attributed to island gigantism, since no other carnivorous animals fill the niche on the islands where they live. However, recent research suggests the large size of Komodo dragons may be better understood as representative of a relict population of very large varanid lizards that once lived across Indonesia and Australia, most of which, along with other megafauna, died out after the Pleistocene (as a result of human activity). Fossils very similar to V. komodoensis have been found in Australia dating to greater than 3.8 million years ago, and its body size remained stable on Flores, one of the handful of Indonesian islands where it is currently found, over the last 900,000 years, “a time marked by major faunal turnovers, extinction of the island’s megafauna, and the arrival of early hominids by 880 ka [kiloannums].”

As a result of their size, these lizards dominate the ecosystems in which they live. Komodo dragons hunt and ambush prey including invertebrates, birds, and mammals. It has been claimed that they have a venomous bite; there are two glands in the lower jaw which secrete several toxic proteins. The biological significance of these proteins is disputed, but the glands have been shown to secrete an anticoagulant. Komodo dragons’ group behaviour in hunting is exceptional in the reptile world. The diet of big Komodo dragons mainly consists of Timor deer, though they also eat considerable amounts of carrion. Komodo dragons also occasionally attack humans.

Mating begins between May and August, and the eggs are laid in September. About 20 eggs are deposited in abandoned megapode nests or in a self-dug nesting hole. The eggs are incubated for seven to eight months, hatching in April, when insects are most plentiful. Young Komodo dragons are vulnerable and therefore dwell in trees, safe from predators and cannibalistic adults. They take 8 to 9 years to mature, and are estimated to live up to 30 years. (Source Wikipedia)

The orangutans are almost home!!!