The WFFT has received a lot of wildlife injured by power lines since the wildlife rescue center was founded in 2001. We have been able to rescue lots of wildlife such as loris, macaques, gibbons and macaques, sometimes able to save the animals life and sometimes we had to accept that there was no help possible for the animal. Luckily the WFFT has been able to help a lot of animals since the beginning of 2005 when we were granted help from Care for the Wild international (CFTWI) to stock up our mobile clinic with much needed instruments and medication.

In the first week of 2008 we were again confronted with the fate of a few langurs and one macaque. These animals were crossing from one fragmented forest to another and had to cross a road where the Provincial Electricity Authority installed power lines some years ago. Unfortunately these power lines are not insulated although this would be the standard when wildlife is near (not only to protect the animals, but also to stop the system from breaking down when animals are touching the lines). 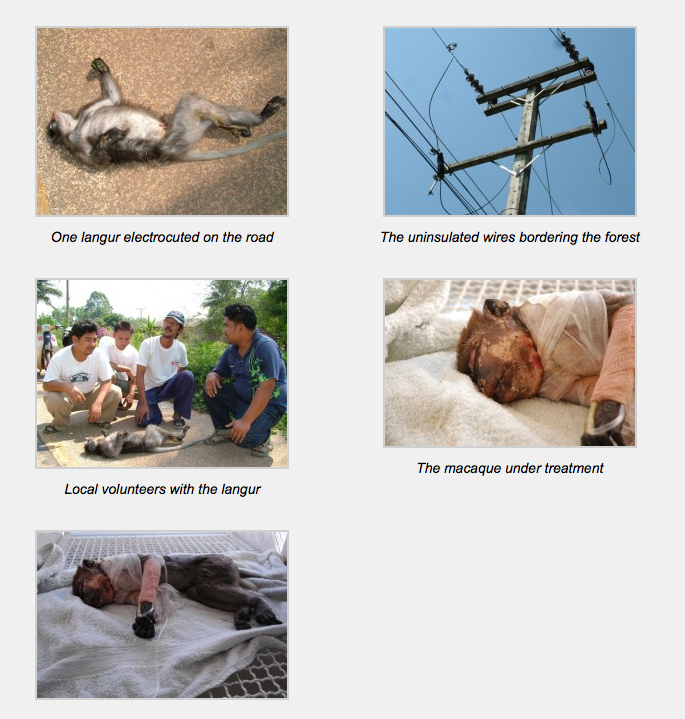 According to the local media that came out in big numbers to witness our rescue efforts there were over 50 langurs killed by electrocution in the last three years. We have been able to save only two victims in this period. Hereby some pictures of the animals that we have been trying to help. We are currently trying to save the live of the female macaque, and as I write this she is actually getting better and sitting up, just only the morning after her horrible ordeal.

The WFFT has written a petition to ask the PEA to change the power lines urgently.

Another rescue of electrocuted loris

Electrocuted loris rescued at WFFT Again a loris was rescued after being electrocuted. The little…

Repatriation of illegal orangutans to go ahead under controversial circumstances