“Pokemon at rescue site in Krabi

In late September 2012 pictures emerged on internet social media sites of a young long- tailed macaque in the south of Thailand in urgent need of help after sustaining severe electrocution injuries. The WFFT rescue team set off immediately on the 12 hour journey to Krabi island. Although they had seen photographs, they weren’t quite prepared for the horrific sight that would meet them on arrival at the picturesque tourist island. Electrocution burns had destroyed the entire left forearm and tail of the juvenile macaque, leaving the remaining bones exposed and the monkey weak from infection. The 2 year old macaque, later named ‘Pokemon’, was given urgent medical attention on site to prepare him for the long journey back to WFFT. After a few days of intensive care at the WFFT hospital, Pokemon’s cheeky character was already starting to shine through and after 1 week he was deemed stable enough for the life-saving amputation surgery. Pokemon’s injuries were so extensive that the entire left arm from above the elbow and all but 3cm of tail needed amputation. Sadly these disabilities would make Pokemon unsuitable for release back to the wild but we were confident that at this young age he would adapt to his shortcomings and have a good quality of life in captivity. Several weeks of dressings followed surgery and with the wounds healed, Pokemon began his rehabilitation and integration to our large field of baby macaques of a similar age. Cheeky Pokemon adapted quickly to his disabilities, eventually climbing and playing with ease, sometimes with his only hand full of fruit! He has made close bonds with our other juvenile macaques and they can be seen playing for hours together amongst the trees. 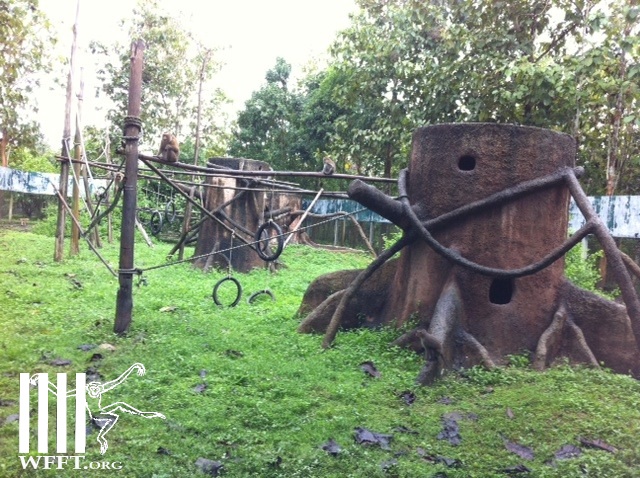 To rescue and unchain “Johnny” !