After almost 10 years being locked up in a small cage This female long-tailed macaque has been rescued and moved to WFFT on August 12th, Thai Mother’s day. The monkey was caught a few years ago by a human rescue unit in Bangkok after it entered peoples houses, not sure whether she was a wild macaque or a pet that got lost somehow. The monkey was given to a temple in Bangkok’s Bangbon district and lived near the toilets at the temple in her relatively small cage. hard to clean with no water available.

In Thailand people “donate” wild animals often to temples. This is done as a kind of merit-making however from our point of view it is merely getting rid of the responsibility of caring while monks at temples usually do not have the money or expertise to properly care for the wild animals. Very often monks do not actually wish to care for the animals but will not refuse to take in the animals. In many cases temples will try to find an alternative place to hand over the monkeys like the one rescued today, but government agencies in most cases do not want to rescue the monkeys as they are short of space. 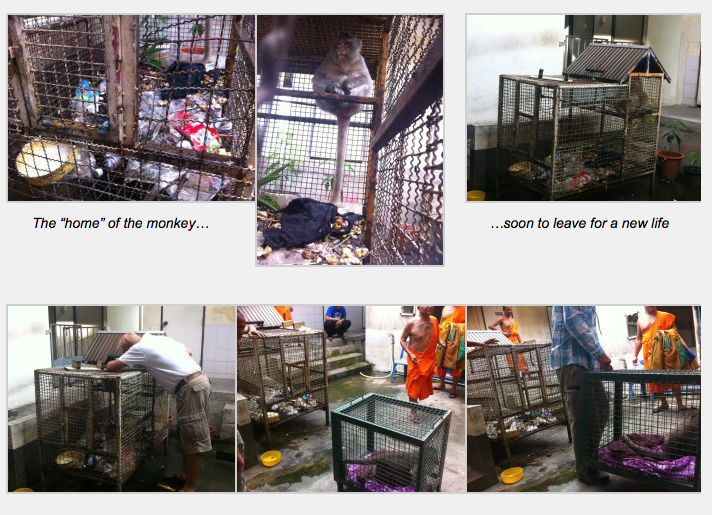 This particular monkey called “Jook-Jick” will be kept at the quarantine of WFFT for two months and will after that hopefully be introduced to a group with young macaques at the center. Jook-Jick has not seen any monkeys for so many years, she might not have good social skills and will probably need a few months to get used to be around other monkeys like her.

We will keep you all updated on her progress…

Stump-tailed macaques get their own forest!

Trees to climb and pools to swim! After building a massive elephant forest enclosure, we…

Earlier this week, a male Sunda Slow Loris was brought to the WFFT Wildlife Hospital.…

A few days ago 2 new residents, Ling-Ling & La La arrived at the WFFT…