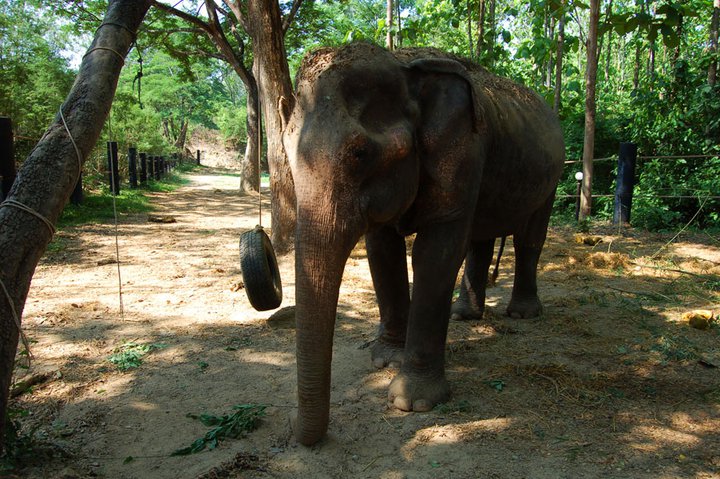 Late last night, female elephant See Puak finally arrived at the WFFT Elephant Refuge & Education Centre, after a 12 hour drive from the elephant camp in Surin which she was rescued from.

Thanks to funds raised through the generous donations of Joan Pearson and friends in Sydney, Australia, WFFT was able to give See Puak the retirement she so greatly deserves.

See Puak is between 45-50 years old, having been captured from the wild at around 10 years of age, which at the time was not unusual, although still illegal. She has spent the last 23 years of her life with the same owner, working mainly at an elephant camp entertaining tourists with tricks.

Knowing how easy See Puak was to ‘train’, thanks to her love of food, her owner also put her to work in the film industry, and See Puak featured in several movies over the years. It was obvious to the rescue team that See Puak’s love of food hadn’t diminished over time, with it being very easy to lead the elephant onto the truck which was to bring her home to WFFT with a few bananas.

After driving through the night, See Puak arrived around midnight and was treated to two large baskets of fruit, which she enjoyed tucking into. At the elephant camp she had been kept on a short 1 metre chain, but this is not the case at WFFT. Although she spent her first night on a very long chain whilst she grew accustomed to her surroundings, now she is completely chainless and free to wander around her paddock, eating the grass and discovering the fruit the volunteers are hiding for her. She’s yet to go into the large pond in her paddock, but no doubt she’ll be exploring that area soon.

Compared to our last two previously rescued elephants, June and Bua Ngun, who were rescued in appalling conditions, See Puak is in relatively decent health, but she still has medical problems; whilst working on the streets she was living near a fish processing plant and drinking contaminated water regularly, which has led to digestive issues. She also has parasites, minor wounds from bullhooks dotted around her body, plus some abscesses, all of which will be receiving veterinary treatment.

One elephant killed, at least one wounded and one missing?

The killing must stop! On Friday 08 March 2013 rangers of Kaengkrachan National park were…

Rescued elephant to be released back to the wild

Going home soon! The young wild elephant that has been under treatment for almost 2…

We really need your support to raise funds for our new Elephants Wild Enclosure. Please…