A story written by “AAA Thailand”, a Thai group in reply to news articles on the “Pajaan” or the breaking of the spirit of elephants in Thailand.

A founder of an elephant rescue foundation based in Lampang has denied in the media that the breaking of the spirit or Pajaan, still happens now in Thailand or even has happened in the last 10 years. AAA breaks the silence and the taboo here, showing evidence it still does happen.

(start quote)
Here are wounds and bruises from brutality towards the elephants just to meet the demand in tourism business.

Every trained elephant in Thailand has faced this cruel torturing. “Though some agency or someone insists that there is no such cruel training, here is the latest photo taken in 2012 in Thailand” 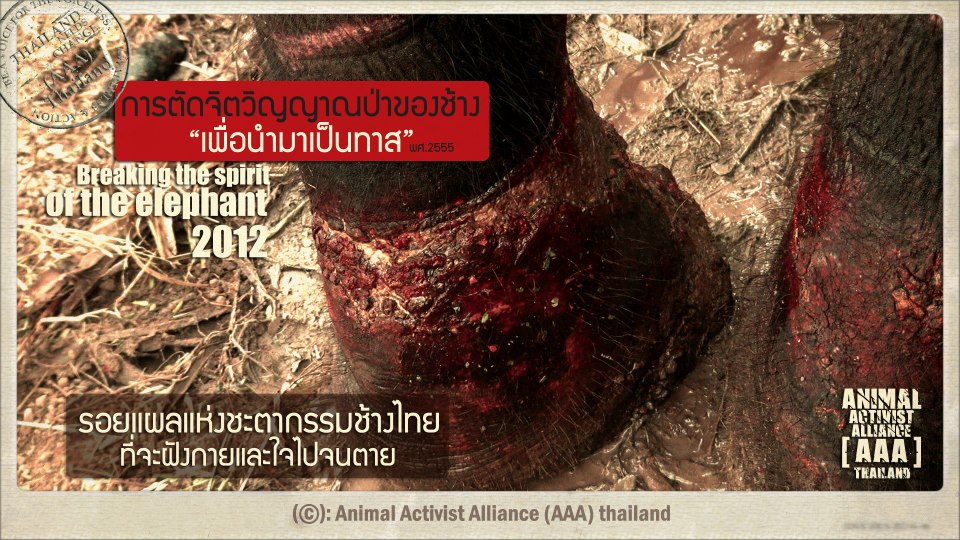 Here are the witness wounds from the brutal training forcing the elephants to surrender to human’s commands. The wounds will be deeply inscribed into the elephants’ bodies and souls until the day they pass away. This kind of training takes no more than 7 days. The elephant is left starving-no food and no water, hacked with a goad, chained, sharply pulled at the legs, hurt, so scared that it defecates itself until it surrenders because of its mentally and physically fear.

“All the cruel torturing and wellness deprivation is what the Thai elephants have to encounter, and they will remember this fear for the rest of their lives.” This is what’s hidden behind the elephants’ intelligence, which the country is trying to cover and which some people do not accept and reveal the truth. Considering the latest photo, all the audience will know by themselves where this incident happened. It is very clear.

Is it fair enough for them when all physical and mental wounds are caused to the elephants only just to entertain humans and support tourism business??

The elephants still have to face this cruel destiny, and brutality will not be alleviated as long as people who work with animals, especially those who work with elephants, do not admit and speak out the truth that the elephants nowadays are in danger and harassed. There are no laws which truly protect pet elephants which were always taken for granted.

The shows presenting “unnatural” talents of the elephants become the pride of Thai people who are glad with the intelligence of the Thai elephants which can do a Hula Hoop dance, but the physical and mental effects hidden behind that talent have never been revealed. On the contrary, the world is looking down upon us because we are forcing animals to distort their nature, which affects their body and soul. They call it “brutality” not conservation. It is just an entertainment business.

This is what all Thai elephant have been through before they can perform a show like playing football or walking on a rope.

In Thai traditional training, 2-3 year old baby elephants need to be in a “cut loose wild spirit” ceremony, which start by take them away from their mothers, chain them tightly in a small cage, let them starve, hit them and cut them with sharp hooks. Within 7 days, those poor babies will be no doubtfully scared to death, and some are literally death. And they have no choice but surrender.

Now, with a hook, you can teach them to do exactly what you want, from a basic thing like “sit down” or “say hi!” to an advance performance like “Hoola hoop dance”. 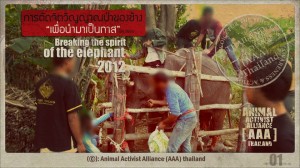 This photo is taken recently in this year 2012. Still some Thai authorities ignore this, saying “No such a torture in Thailand now a day!” Of course, they can’t accept the truth because Thai elephant has become one of the favorite among foreign tourists for so long. (Try google “Thailand travel” or something like that and you’ll see) Stop elephant training = Stop elephant show = No big income, then why would?— 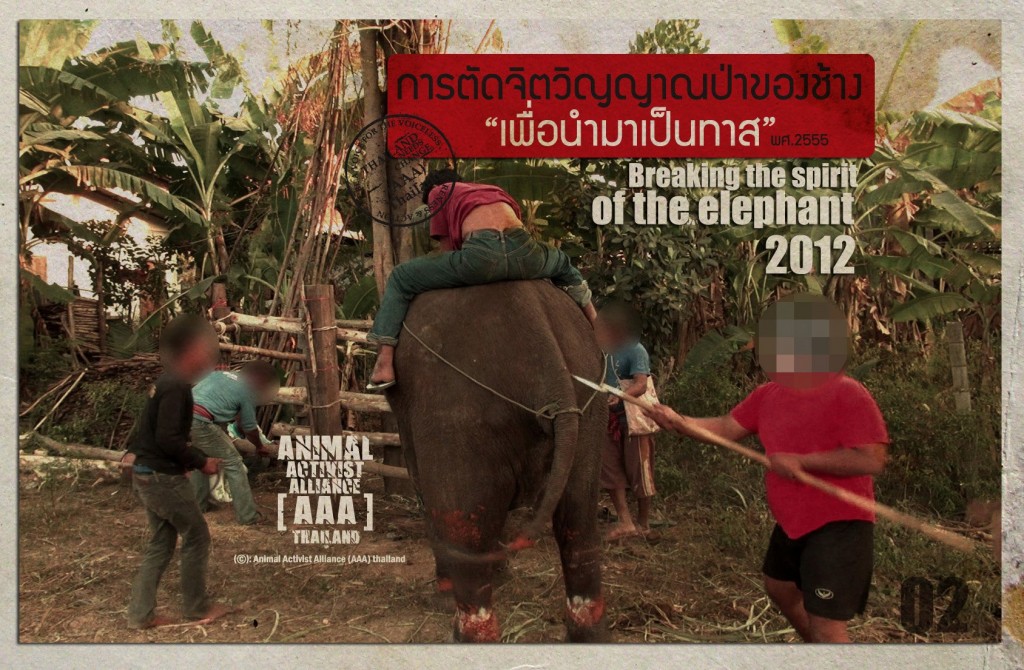 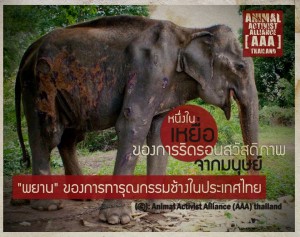 AAA poster of “June” an elephant rescued by WFFT

The truth about “Thai Elephants” needs to be reveal because they are living animals, because they have feelings just like us and above of all, they are our national symbol and we need to protect them and bring their stories to justice. We are taking too much advantage and abusively use of the elephants in a lot of industry not only the illegal logging industry but also the entertainment “BUSINESS” such as tourism, elephants shows, elephant ride, elephant painting, ect. And the government officials are trying to hide the truth and kept the true stories of how abusive the elephant training are from the public for the advantage of some group of people. We will reveal the true stories of those Elephants who are being tortured, abused, neglected and treated un respectfully for “BUSINESS” so we all understand the fact and the pain behind the lovely scene, elephant ride and the pain and suffering behind every single elephant paintings. We hope, by knowing the truth about how they were kept, punished, and trained, it will help the well being of the elephants. We need better elephant welfare; we need an animal protection law, “WE NEED CHANGE” Lets – together – learned – realized – speak up and make a better world for our elephants, they deserved it. (end quote)

Disclaimer: the views of the writers above are theirs and theirs only and do not necessary reflect WFFT thoughts or objectives.
WFFT does actively supports the AAA Thailand in their fight for animal rights.

Christmas enrichment for WFFT rescued wildlife
Our amazing volunteers and staff did an incredible job spreading some festive cheer this holiday season! The rescued animals absolutely loved their Christmas enrichments.
We’re hiring: Elephant Refuge Volunteer Coordinator
We are seeking a highly motivated individual to join our current team of Volunteer Coordinators here at the WFFT Elephant Refuge.
3.5 years at WFFT for happy elephant, Mee Chai
Mee Chai always looks like she is smiling and having a good time! But this wasn't always the case. This elephant was abused for 37 years!
Copyright Wildlife Friends Foundation Thailand - All Rights Reserved - | - GDPR Privacy Our Policies
Back To Top
This website uses cookies to improve your experience. We'll assume you're ok with this, but you can opt-out if you wish. Accept Reject Our Policies
Privacy & Cookies Policy