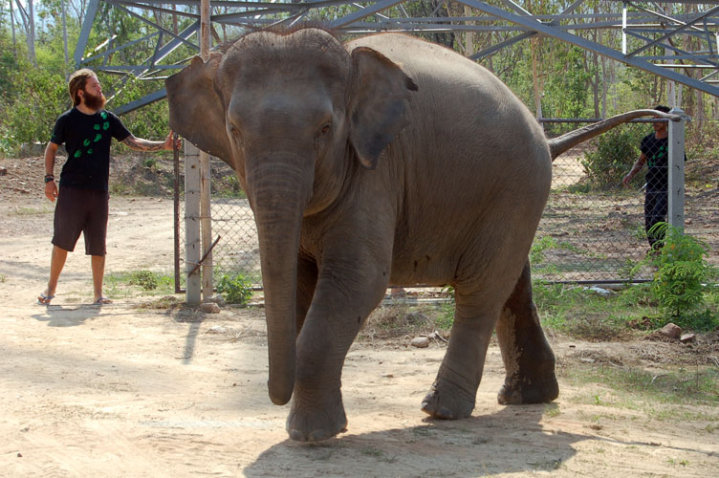 It was all change for the elephants yesterday at the WFFT Elephant Refuge and Education Centre (EREC), as paddocks and enclosures were rotated and elephants were paired up with new friends!

The WFFT vet team first had to slightly sedate the boisterous Khan Kluay before he could be moved. The mahouts working at WFFT then walked the elephants to their new enclosures, where they are settling in…

Khan Kluay, the 4 year old male elephant previously living with 5 year old female Soy Thong, is now living with the old adult female Somboon. As he grows up, he is in more need of guidance from an older adult, and Somboon is already beginning to mother him!

Khan Kluay and Somboon are now living in Pai Lin’s former enclosure up at the top fields, whilst Pai Lin – another elderly female – has moved next door into Bua Ngun’s enclosure.

Pai Lin and the elderly female Bua Ngun were introduced, but being the dominant old lady that she is, it quickly became obvious that Pai Lin was not going to get on with the poor Bua Ngun!

After Pai Lin headbutted Bua Ngun in the bottom and made it obvious she didn’t want to share her field, Bua Ngun was moved down into the paddock in the middle of the Elephant Refuge. In this paddock she is close to the hospital, so the vet team have easy access to her in order to clean her wounds, inflicted before WFFT rescued her.

Soy Thong is now living in the bottom elephant paddock with Namfon and Kiaew Ta, and the two old ladies are looking after her well.

All the elephants seem happy with their new pairings and the change of enclosures, and are busy investigating each other and their surroundings!

Rescued elephants socialising into a herd at WFFT elephant refuge

First steps into the new project! Finally! The elephants are starting to live together…

Landing page of the THAI ELEPHANT

Plans to protect elephants should focus on protecting habitat, curbing conflict with humans and proper punishment of poachers. Rangers at Khao Yai National Park in central Thailand heard the trumpeting of distressed elephants several hours before dawn on Saturday October 5.