On behalf of WFFT and WFI, Geert Drieman director of WFI, attended the International Whaling Commission (IWC) meeting in Slovenia this month. WFFT and WFI joined an NGO statement denouncing the European policy to allow and promote whale killings in Greenland. 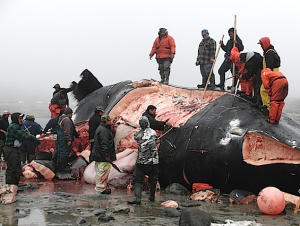 In occasion of the opening of the 65th meeting of the International Whaling Commission (IWC) 15 civil society organisations denounce that member countries to the European Union sentenced to death humpback whales that are vital for the subsistence of many communities from developing countries through the non-lethal use of these cetaceans.

Through the presentation of a “package” of proposals regarding aboriginal subsistence whaling quotas to Greenland/Denmark, the European Union is also dismantling the global moratorium on commercial whaling, one of the greatest achievements in the history of environmental law.
In Greenland, the whale meat is being increasingly commercialised in restaurants, hotels and tourist cruisers, in spite of the fact that the products obtained should only be destined for local consumption.

In 2012 the European Union rejected these captures, which makes it incomprehensible that only two years later its member countries pushed with determination a proposal that not only undermines the moratorium but also directly affects the interests of some Latin American communities that use these marine mammals in the growing industry of whale watching.

In particular, the European Union proposal sentenced dozens of humpback whales that migrate from the Arctic to the warm waters of the Dominican Republic and other Caribbean nations where their presence sustain the expansion of whale watching activities that are fundamental to coastal communities of these developing countries.

Although it has one of the strictest legislations in cetacean conservation, the European Union has also decided to ignore the illegal whaling Greenland/Denmark conducts since 2013 without the authorization of the IWC, and the irrefutable evidences of the commercial character of these slaughters.

The European Union will go in history as the block of countries responsible of generating the conditions to de facto eliminate de moratorium and advance towards the reopening of commercial whaling, an activity that drove most great cetacean species to the brink of extinction.