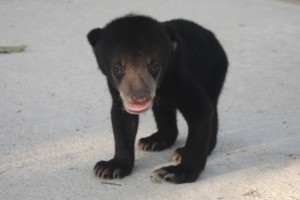 On Tuesday 23rd February, a 3 month old Malayan Sun Bear arrived at the WFFT wildlife hospital. She was handed in by her owner, a farmer, who stated that he had been looking after her for 2 months. The farmer stated that he found her wandering across a road on his farm land, and took her in. Before being taken, she had no doubt been living happily with her mother in the wild in our local Kaeng Krachan national park.

The little bear cub, who has been called Kamala, is very humanised due to being around people for most of her short life. She is in good health, having being fed regularly by the farmer on dogs milk, which is a good substitute for her mother’s milk.

She is currently being looked after by the WFFT vet team, who are nursing her around the clock. Unfortunately, because she has to be hand-reared, Kamala will have to remain at WFFT. In the future though, once she is older, we hope to introduce her to other Malayan Sun Bears who can teach her valuable bear skills.

A New Life for the Lannister brothers

Treatment of bears at temples

Helping bear Kaew and her friends to get a new home!